Coming of age facts for kids 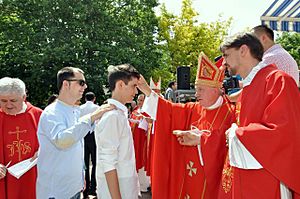 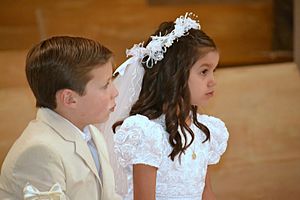 Coming of age is a young person's transition from being a child to being an adult. It continues through the teenage years of life. The specific age at which this transition takes place varies between societies, as does the nature of the change. It can be a simple legal convention or can be part of a ritual or spiritual event, as practiced by many societies. In the past, and in some societies today, such a change is associated with the age of (early adolescence). In others, it is associated with an age of religious responsibility. Particularly in western societies, modern legal conventions which stipulate points in late adolescence or early adulthood (most commonly 17-21 when adolescents are generally no longer considered minors and are granted the full rights and responsibilities of an adult) are the focus of the transition. In either case, many cultures retain ceremonies to confirm the coming of age, and coming-of-age stories are a well established sub genre in literature, film industry and even comics.

All content from Kiddle encyclopedia articles (including the article images and facts) can be freely used under Attribution-ShareAlike license, unless stated otherwise. Cite this article:
Coming of age Facts for Kids. Kiddle Encyclopedia.