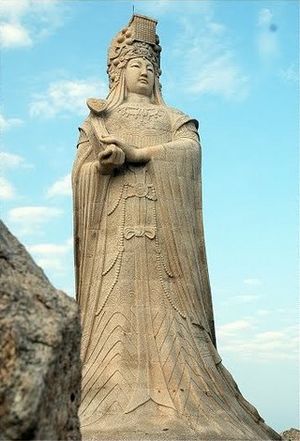 Mazu, also known as Matsu, is a popular Taoist and Chinese Buddhist goddess. She is the goddess and patroness of the sea. She is believed to protect fisherman and sailors. Mazu is widely worshiped in southern China, Vietnam, Taiwan, Zhejiang, Fuijian, Guangdong and Hainan. She is popularly known as Empress of Heaven and Holy Mother Empress of Heaven. Her other popular titles are Holy Mother Empress of the Heavens above, Heavenly Imperial Concubine, Lady Mazu, Heavenly Princess consort and Heavenly Holy Mother.

Mazu was born on 23 March 906. According to legend when she did not cry when she was born, so she was thereafter named Lin Moniang which means Silent girl or silent young female. She had a mysterious ability to predict weather and often she warned others to not make journeys to the sea. She became a very good swimmer and would often rescue people from the sea even in the harshest weather. There are at least 2 versions of her death. 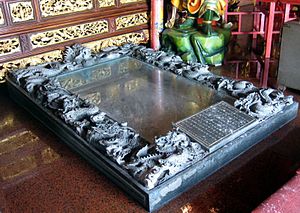 After her death, her family and many other families of sailors and fishermen started to pray for her heroic acts to try to save those at sea. Soon her worship spread quickly to other parts of Asia. Starting from Fuijian, worship of Mazu spread to neighboring coastal provinces of Zhejiang and Guandong, and thence to all coastal areas of mainland China. Later, due to Chinese immigrants, the worship of Mazu further spread to Taiwan, Vietnam, Japan, Ryuku Islands, and parts of Southeast Asia. Many people soon began to build temples dedicated to Mazu all over the world. 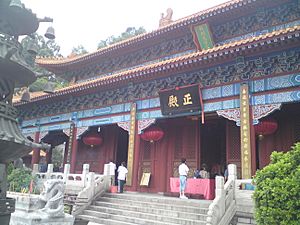 Mazu is usually shown sitting on a throne between two demons known as "Thousand Miles eye" (Chinese: 千里眼, Qianli Yan) and "With-the-Wind Ear" (Chinese: 順風耳 Shunfeng Er). According to legend, both of them were conquered by Mazu and then both of them fell in love with her. Mazu said she would marry the one that defeats her. Using her martial art skills, Mazu defeats them both and they become her friends. She is usually dressed in a red robe in paintings and murals, but in sculptures she is clothed in jewel-festooned robes of an empress holding a ceremonial tablet or a jeweled staff whilst wearing the easily recognized flat-topped imperial cap with hanging beads at the front and back. 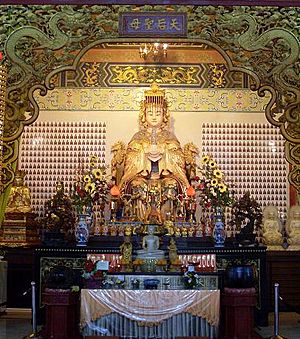 All content from Kiddle encyclopedia articles (including the article images and facts) can be freely used under Attribution-ShareAlike license, unless stated otherwise. Cite this article:
Mazu (goddess) Facts for Kids. Kiddle Encyclopedia.