Uchimura was already considered by many in artistic gymnastics to be the greatest gymnast of all time after his success at the 2012 Summer Olympics in London, but he subsequently solidified this position in the sport further by following up his performance in London with additional and uninterrupted wins at every major competition throughout the next Olympic cycle leading up to his individual all-around gold-medal victory at the 2016 Summer Olympics in Rio de Janeiro.

He is known for being the first gymnast (male or female) to win every major all-around title in an entire single Olympic cycle, accomplishing this feat twice by winning six world (2009–2011 and 2013–2015) and two Olympic (2012 London Olympics and 2016 Rio Olympics) individual all-around titles.

Uchimura is also the individual all-around silver medalist at the 2008 Summer Olympics in Beijing. He is known for delivering difficult and accurately executed routines. The International Gymnast Magazine had praised his skills as a "combination of tremendous difficulty, supreme consistency and extraordinary elegance of performance." 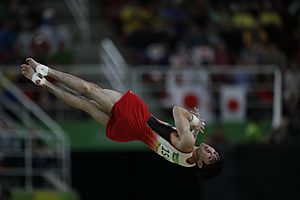 Uchimura was born in Kitakyushu, Fukuoka Prefecture, and began gymnastics at age 3 at his parents' sports club in Nagasaki Prefecture. His parents, Kazuhisa and Shuko Uchimura, were both competitive gymnasts.

At age 15, he moved to Tokyo to train with Athens gold medalist Naoya Tsukahara. His younger sister Haruhi Uchimura is also a gymnast.

Uchimura joined Japan's national team in 2007. He made his senior debut at the 2007 Paris World Cup in March, a major international event. Here he won bronze on vault and placed ninth on floor. In August, he won team gold and 1st on floor and 3rd on vault at the 2007 Summer Universiade in Bangkok.

At Japan's national championships in October, he placed 7th in the all around. A month later, at the international "Good Luck Beijing" event, he won silver with the Japanese team and placed 7th on floor exercise. 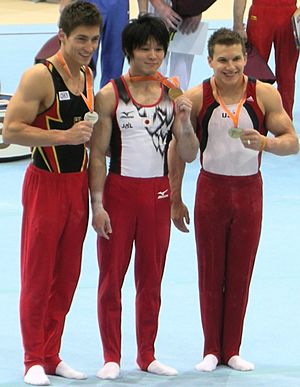 Uchimura married in autumn of 2012 and has two daughters, born in 2013 and 2015. Asked if he would teach them gymnastics, he replied, "If they were boys I think I probably would... but I don't understand women's gymnastics, and I think it's much more severe."

He eats just one meal a day and rather dislikes vegetables.

All content from Kiddle encyclopedia articles (including the article images and facts) can be freely used under Attribution-ShareAlike license, unless stated otherwise. Cite this article:
Kōhei Uchimura Facts for Kids. Kiddle Encyclopedia.