Alamosaurus was a titanosaur, a gigantic plant-eating dinosaur from the Upper Cretaceous period, about 73 million to 65 million years ago.

Alamosaurus was a long-necked, whip-tailed dinosaur. It was about 69 feet (21 m) long and weighed perhaps 33 tons (30000 kg). Fossils have been found in New Mexico, Texas, and Utah. Fossils include fragmentary skeletons (and no skulls).

Skeletal elements of Alamosaurus are among the most common Late Cretaceous dinosaur fossils found in the United States Southwest and are now used to define the fauna of that time and place. There was a climate change in this area, it became drier, and this caused changes in the fauna.

Skeletal elements of Alamosaurus are among the most common Late Cretaceous dinosaur fossils found in the United States Southwest and are now used to define the fauna of that time and place.

The appearance of Alamosaurus may have represented an immigration event from South America. 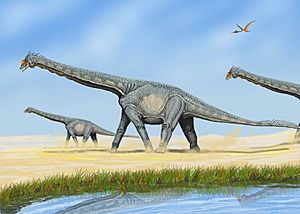 Contrary to popular assertions, this dinosaur is not named after the Alamo in San Antonio, Texas, or the battle that was fought there. The holotype, or original specimen, was discovered in New Mexico and, at the time of its naming, Alamosaurus had not yet been found in Texas.

Instead, the name Alamosaurus comes from Ojo Alamo, the geologic formation in which it was found. The term saurus is derived from saura, Greek for "lizard" and is the most common suffix used in dinosaur names.

There is one species (A. sanjuanensis), which is named after San Juan County, New Mexico, where the first remains were found. Both genus and species were named by Smithsonian paleontologist Charles W. Gilmore in 1922. 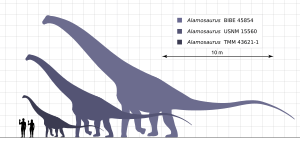 Size comparison, showing the scale of one of the more complete Alamosaurus specimens. Fragmentary remains suggest it could grow much larger 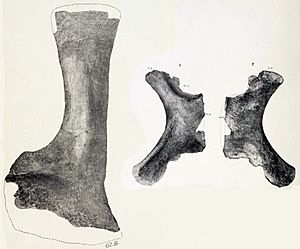 Alamosaurus remains have been discovered throughout the southwestern United States. The holotype was discovered in the Naashoibito Member of the Ojo Alamo Formation (or Kirtland Formation under a different definition) of New Mexico which was deposited during the Maastrichtian stage of the Late Cretaceous Period.

Bones have also been recovered from other Maastrichtian formations, like the North Horn Formation of Utah and the Black Peaks, El Picacho and Javelina Formations of Texas.

No skull material is known, except for a few slender teeth, and no armor scutes have been reported, such as those found in other advanced titanosaurians like Saltasaurus.

All content from Kiddle encyclopedia articles (including the article images and facts) can be freely used under Attribution-ShareAlike license, unless stated otherwise. Cite this article:
Alamosaurus Facts for Kids. Kiddle Encyclopedia.