The North Horn Formation is a widespread non-marine sedimentary unit with extensive outcrops exposed in central and eastern Utah. The formation locally exceeds 3,600 feet (1,100 m) in thickness and is characterized by fluvial, lacustrine, and floodplain dominated systems, representing a terrestrial, high energy, depositional environment. The sediments date from Late Cretaceous (Maastrichtian) to early Paleocene in age and include the K-Pg extinction event boundary; however, this boundary is extremely difficult to locate and there is no strong stratigraphic evidence available that indicates a specific marker bed such as an iridium rich clay layer. Thus far, the only visible evidence is represented in the form of faunal turnover from dinosaur to mammal-dominated fossil assemblages. Taxa from the Cretaceous part of the formation include squamates, testudines, choristoderes, crocodyliforms, sharks, bony fishes, amphibians, mammals, dinosaurs, eggshell fragments, trace fossils, mollusks, plant macrofossils, such as wood fragments, and palynomorphs. 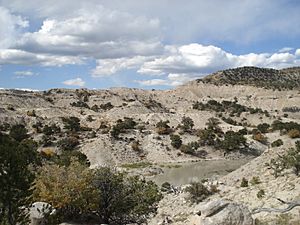 The formation is divided into three informal units based on broad but distinct lithological characteristics. These units include the lower variegated unit at the base, a middle coal unit (in which the K-Pg boundary is located), and the upper variegated unit at the top. The units themselves are further divided into a total of eight sub-units, or lithofacies, based on facies scale lithological features. A detailed sedimentary study of the North Horn Formation was conducted by Lawton et al. These units, from oldest to youngest, include a 330 ft (100 m) thick basal conglomerate unit that consists of an upward fining conglomerates and sandstone and lacks any interbedded shale, followed by the lower redbed unit, a 790 ft (240 m) thick sequence dominated by red sandy siltstone, conglomerate, and pebbly sandstone. The third unit is the sheet sandstone unit and is composed of sheetlike sandstone beds that are interbedded with gray and carbonaceous siltstones. Some limestone beds are present but are uncommon. The fourth unit is characterized by 131 to 374 ft (40 to 114 m) thick coal beds and coal-streaked siltstone deposits and are referred to as the coal-bearing unit. This unit is overlain by a 833 ft (254 m) thick sequence of primarily calcareous siltstone beds, called the calcareous siltstone unit. The big mountain unit consists of nearly 750 feet (230 m) of interbedded conglomerates and trough cross bedded sandstones, followed by a 200 ft (60 m) thick set of strata composed of sandstone, pebbly sandstone, and conglomerates which make up the coal canyon unit. The uppermost unit is the upper redbed unit, which is nearly a 390 ft (120 m) thick and is composed of red brown mottled siltstone and sandy siltstone.

Characteristic dinosaur taxa include the ceratopsian Torosaurus utahensis, the titanosaurid sauropod Alamosaurus sanjuanensis, and the theropod Tyrannosaurus; however, the most frequently occurring taxon in the Cretaceous strata of the North Horn Formation is the Polyglyphanodont squamate Polyglyphanodon. Fauna recorded from Paleocene strata within the formation appear to be far more diverse and over 70 different taxa have been identified, including frogs, numerous multituberculate, protoeutherians, periptychids, arctocyonids and phenacodontid mammals, crocodyliforms, choristoderes, trace fossils, and palynomorphs. Marsupial remains similar to Alphadon and Eodelphis have also been found here as well.

Pterodactyloid tracks present at an unnamed site. The specimens are kept at the Dinosaur Tracks Museum, of the University of Colorado at Denver. Bird and dinosaur eggs have also been found at the site, along with unidentified hadrosaur fossils (possibly from Edmontosaurus or Kritosaurus).

All content from Kiddle encyclopedia articles (including the article images and facts) can be freely used under Attribution-ShareAlike license, unless stated otherwise. Cite this article:
North Horn Formation Facts for Kids. Kiddle Encyclopedia.