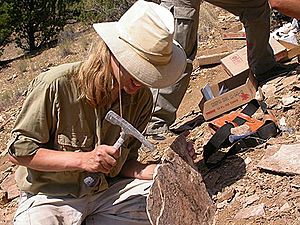 Palaeontology or Paleontology is the study of fossils of living things, and their phylogeny (evolutionary relationships). It depends on basic sciences such as zoology, botany and historical geology. The term palaeobiology implies that the study will investigate the palaeoecology of the groups in question.

In palaeozoology, the evolution of those phyla with fossil records are studied: see List of animal phyla. In palaeobotany, fossil plants are studied. In historical geology the formation, sequence and dating of rock strata give information about past environments.

A fossil is any kind of life that is more than ten thousand years old and preserved in any form that we can study today. The fossil record is always incomplete, and later discoveries may extend the known survival of a group. See Lazarus taxon.

All content from Kiddle encyclopedia articles (including the article images and facts) can be freely used under Attribution-ShareAlike license, unless stated otherwise. Cite this article:
Paleontology Facts for Kids. Kiddle Encyclopedia.