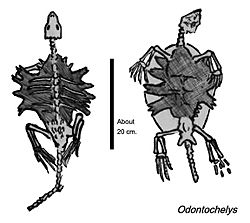 Odontochelys is the oldest known turtle to have been discovered. It was first described from three 220 million year-old specimens excavated in Upper Triassic rocks in Guizhou, China.

One of the most striking features of turtles, both modern and prehistoric alike, are their dorsal shells, forming an armored carapace over the body of the animal. Odontochelys only had the bottom portion of a turtle's armor, the plastron. It did not yet have a solid carapace as most other turtles do. Instead of a solid carapace, Odontochelys had broadened ribs like those of modern turtle embryos that still have not started developing the ossified plates of a carapace.

In a comparison of skull proportions, the skull of Odontochelys is far more elongated in front of the eyes compared to other turtles. The tail of the prehistoric turtle was longer in proportion to its body than other turtles. In addition, the transverse processes found in the tail are not fused such as in later turtles.

Taken together, these anatomical differences mean that Odontochelys has some of the most primitive features ever seen in a turtle and is somewhat of a transitional fossil. Some scientists, however, are skeptical of this idea. Reisz and Head suggest that Odontochelys does not represent a turtle with a partly evolved shell, but that it is a descendant of an older, land–living turtle, and that the shell became reversed. Such shells can be seen on modern turtles, like the leatherback turtles (the genus Dermochelys).

It is likely that Odontochelys was aquatic, as the fossil specimens were found in marine deposits full of conodonts and ammonites. The primitive turtle swam in shallow marine waters close to shore.

The species' name, Odontochelys semitestacea literally means "toothed turtle with a half-shell" - an apt description of its most striking physical characteristics.

All content from Kiddle encyclopedia articles (including the article images and facts) can be freely used under Attribution-ShareAlike license, unless stated otherwise. Cite this article:
Odontochelys Facts for Kids. Kiddle Encyclopedia.