Ammonites are a group of extinct marine mollusc animals cephalopod molluscs of the subclass Ammonoidea.

These creatures lived in the seas from at least 400 to 65 million years ago. They became extinct at the K/T extinction event. They are excellent index fossils, and it is often possible to link the rock layer in which they are found to specific geological time periods.

Nine orders are recognized in the Ammonoidea: five in the Palaeozoic and four in the Mesozoic.

Their nearest living relatives are the octopus, squid, cuttlefish and Nautilus.

Ammonites' widely-known fossils show a ribbed spiral-form shell, in the end compartment of which lived the tentacled animal. 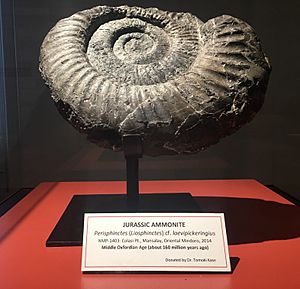 Ammonites first appeared in the early Devonian period. They evolved from what was an early Nautiloid. They quickly evolved into a variety of shapes and sizes. During their evolution the ammonites faced no fewer than four catastrophic events that would eventually lead to their extinction.

This event marked the end of the Triassic and the beginning of the Jurassic, during which time the number of ammonite species grew once more. The final catastrophe occurred at the end of the Cretaceous period when all species were annihilated and the ammonites became extinct. 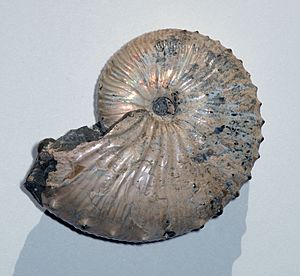 Jeletzkytes, a Cretaceous ammonite from the USA

Ammonites began life as tiny creatures less than 1mm in diameter. In their infancy they would have been vulnerable to attack from other predators, including mosasaurs and fish. However, their shell gave their soft parts some protection.

The young ammonites lived in the plankton, near the sea surface. They ate mostly small fry as they were growing. This made them especially vulnerable to any event which upset the plankton zone.

Ammonites swam by jet propulsion, as do most other cepalopod's. Water would have come into the mantle cavity, passed over the gills, and was squirted out.

Ammonites vary greatly in the decoration (surface relief) of their shells. Some may be smooth and relatively featureless, except for growth lines, and resemble that of the modern Nautilus. In others, various patterns of spiral ridges and ribs or even spines are shown. This type of ornamentation of the shell is especially evident in the later ammonites of the Cretaceous. 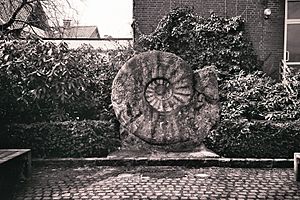 Few of the ammonites occurring in the lower and middle part of the Jurassic period reached a size exceeding 23 centimetres (9 inches) in diameter. Much larger forms are found in the later rocks, such as Titanites from the Portland Stone of Jurassic of southern England, which is 53 centimetres (2 feet) in diameter, and Parapuzosia seppenradensis of the Cretaceous period of Germany, which is one of the largest known ammonites, reaching 2 metres (6.5 feet) in diameter.

The largest documented North American ammonite is Parapuzosia bradyi from the Cretaceous with specimens measuring 137 centimetres (4.5 feet) in diameter. 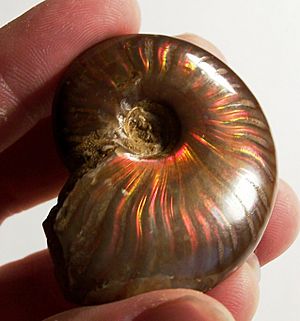 An iridescent ammonite from Madagascar

Fossils, such as many found in Madagascar and Alberta (Canada), display iridescence. These iridescent ammonites are often of gem quality (ammolite) when polished. In no case would this iridescence have been visible during the animal's life; additional shell layers covered it.

The ammonoids as a group continued through several major extinction events, although often only a few species survived. Each time, however, this handful of species diversified into a multitude of forms.

Ammonite fossils became less abundant during the latter part of the Mesozoic, with none surviving into the Cenozoic era. The last surviving lines disappeared along with the dinosaurs 65 million years ago in the Cretaceous-Tertiary extinction event.

All content from Kiddle encyclopedia articles (including the article images and facts) can be freely used under Attribution-ShareAlike license, unless stated otherwise. Cite this article:
Ammonite Facts for Kids. Kiddle Encyclopedia.