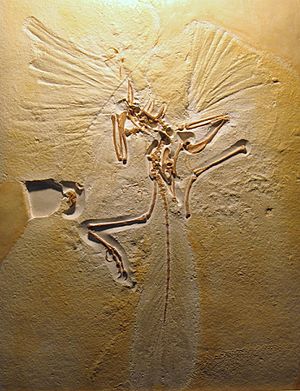 The London specimen of Archaeopteryx (cast)

In mosaic evolution some characters in a transitional form are basal, while others are remarkably advanced.

Apparently, evolutionary change takes place rapidly in some body parts or systems without simultaneous changes in other parts. Another definition is the "evolution of characters at various rates both within and between species".408 Its place in evolutionary theory comes under long-term trends or macroevolution.

Evolution from a basal (early) form to a derived (later) form takes place in stages. Modules (groups of characters) change semi-independently of each other. They change at different times, so producing a mosaic of primitive and derived traits.

These changes play a leading role in major evolutionary transitions. It may involve speciations producing a series of species, only a few of which would be found as fossils.

By its very nature, the evidence for this idea comes mainly from palaeontology. It is not claimed that this pattern is universal, but it is common. There are now a wide range of examples from many different taxa.

Huxley had pointed out that Archaeopteryx was a mixture of reptile and bird features. Without the feathers and arms, its skeleton looked just like that of Compsognathus. We now know its bone growth physiology was much slower than modern birds, and more like that of its dinosaur ancestors. This means it would take longer after hatching before it could fly. A modern precocial bird takes for 3–6 weeks from hatching to flying. In Archaeopteryx this milestone might have taken about 18 weeks. It might have taken two to three years to reach its final adult size. The evolution of the physiology of modern forms occurred later in the group's history. They have had over 140 million years to evolve since Archaeopteryx.

Recent work shows how master control systems in development ('homeoboxes') can organise selective changes in different parts of an organism. This is what underlies mosaic evolution.

All content from Kiddle encyclopedia articles (including the article images and facts) can be freely used under Attribution-ShareAlike license, unless stated otherwise. Cite this article:
Mosaic evolution Facts for Kids. Kiddle Encyclopedia.