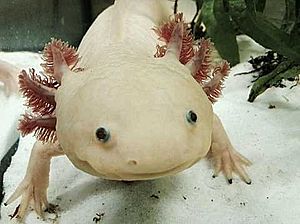 Axolotls retain gills and fins as adults; these are juvenile features in most amphibians.

Its importance in biology is to explain the way closely related animals may come to have quite large differences in shape, and size, whilst nevetheless having a rather similar genome. The main components are the time a process starts and stops in development, and the rate at which the process works.

All content from Kiddle encyclopedia articles (including the article images and facts) can be freely used under Attribution-ShareAlike license, unless stated otherwise. Cite this article:
Heterochrony Facts for Kids. Kiddle Encyclopedia.