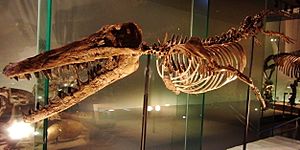 Early cetaceans like Ambulocetus natans possessed hindlimbs, derived from their walking ancestors, but no longer useful in their marine environment.

Macroevolution refers to large-scale evolution. For some, this means the origin of species. For others, it means the large-scale changes seen in the fossil record.

It is a term of convenience: for most biologists it does not suggest any change in the process of evolution. For a few palaeontologists, some things they see in the fossil record cannot be explained just by the gradualist evolutionary synthesis. They are in the minority. There are some interesting discussions by other palaeontologists.

Some biologists use the term for evolution in already separated gene pools. For them, macroevolutionary studies focus on change that occurs at or above the level of species. Again, this is a minority position. Most biologist would not call evolution at the species level "macroevolution".

Microevolution, on the other hand, refers to smaller evolutionary changes within species or populations. During microevolution changes in allele frequencies definitely do occur. Some biologists, Richard Dawkins in particular, have suggested that the gene is the object of selection. This was always challenged by Ernst Mayr "The individual is the entity which survives or not, which reproduces or not, and which reproduces successfully or not". Changes in gene frequency in populations is a by-product of what happens to individuals.

Paleontology, evolutionary developmental biology, and sequence analysis contribute much evidence for the patterns and processes that can be classified as macroevolution. An example of macroevolution is the appearance of feathers during the evolution of birds from one group of dinosaurs.

Within the modern evolutionary synthesis school of thought, macroevolution is thought of as the compounded effects of microevolution. Thus, the distinction between micro- and macroevolution is not a fundamental one – the only difference between them is of time and scale.

Some creationists have also adopted the term 'macroevolution' to describe the form of evolution they reject. They may accept that evolutionary change is possible within species (microevolution), but deny that one species can evolve into another (macroevolution). These arguments are rejected by biologists, who hold that there is ample evidence that macroevolution has occurred in the past.

Some examples of subjects whose study falls within the realm of macroevolution:

Origin of the Term

Russian entomologist Yuri Filipchenko (or Philipchenko, depending on the transliteration) first coined the terms 'macroevolution' and 'microevolution' in 1927 in his German language work, Variabilität und Variatio.

Since then, their meanings have been revised several times and fallen into disfavour with many, who prefer to speak of biological evolution as one process.

Evolution as a whole is strongly supported by many kinds of evidence.

The issue for biologists is whether there is any sense in having the special term macroevolution. The answer is yes for a few biologists who proposed one or more evolutionary mechanisms which worked above the species level. The ideas of punctuated equilibrium and species selection were suggested, but in each case most biologists felt they could be explained by the usual small-scale changes. This explains why 'macroevolution' is perhaps a term biologists do not need to use.

When discussing the topic, creationists use "strategically elastic" definitions of micro- and macroevolution. Macroevolution, by their definition, cannot be attained. Any observed evolutionary change is described by them as being "just microevolution".

The debate between biologists continues, with some biologists stating that there is significant evidence that other factors have acted during macroevolution, and others maintaining that macroevolution can still be fully explained by the mechanisms of microevolution.

All content from Kiddle encyclopedia articles (including the article images and facts) can be freely used under Attribution-ShareAlike license, unless stated otherwise. Cite this article:
Macroevolution Facts for Kids. Kiddle Encyclopedia.