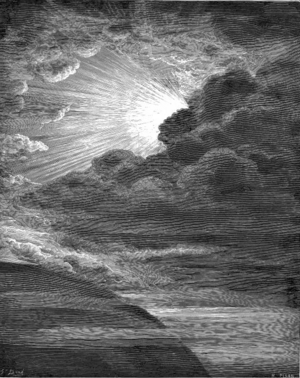 "The Creation of Light" by Gustave Doré

Creationism is the religious belief that the universe was created in the way described in religious books. According to Genesis, God directly created life from the nothingness that was before, by fixing the chaos that was. Other religions have different creation myths. The first approach is known as creatio ex nihilo, which is the Latin name for creation from nothing.

The idea that God created the world has been taught for thousands of years by writers such as Augustine of Hippo.

Creationism as it is known today started in the 19th century by fundamentalist Protestants who were opposed to the theories that scientists began to put forward about geology and evolution.

In the 20th century, creationist movements also started in Islam and Judaism.

Creationists do not believe that all of today's living things came about from simple organisms changing or evolving slowly over time. They believe that life was created much as it is today, and that one form of life cannot change into another. While biologists and paleontologists say that fossils are different from the life we see today, and can be put into order to show changes over time. Young Earth Creationism says life was created in a short time, in its current form. They point to the Flood of Noah to account for most rock formations and most fossils. There is also an Old Earth creationism.

Young Earth Creationism goes completely against conventional geochronology. This kind of creationism says God created the earth roughly 6,000 or 10,000 years ago as told in Genesis. Young Earth Creationists believe that God created the world in six days (with God resting on the seventh) as the Book of Genesis says. Young Earth Creationism says that Noah's flood is important to creationism. They argue that "the first buried fossils of each group are complete and complex (complicated), strong support for the biblical concept (idea) that each kind of life was created well designed to multiply after its own kind." They believe that the Bible is literally true (see Biblical inerrancy). Some people say a problem with this is that fossils appear in layers called strata.

If fossils were of animals drowned in the flood scientists think they would be mixed together. Christian creationists say this happened because of the Noahic Flood, and point to fossils of animals that died quickly. They offer many defenses. Some of these are:

1. Fossils that were buried quickly, as in Lagerstätten. One fossil Creationists talk about is where one fish is eating another fish when it was buried.

2. Polystrate fossils are fossils that go through multiple rock layers. Christian scientists say this can't happen if the rock layers were formed quickly

3. Bent rock layers are rock layers that are bent in a way that Christian scientists say can not happen over millions of years. Christians say there are a lot of these.

Other creationists believe God created everything between 13,000 and 14,000 million years ago. This is called Old Earth Creationism.

Creationists point to the perfection of Earth's size, shape, and distance as designed by God, and Earth's imperfections as proofs that the Earth is dirtied by humans' sin.

The term creationism can be used with more than one meaning.

Liberal Christians do not believe in Biblical inerrancy and say God used evolution to create mankind and other life. This idea is called theistic evolution.

Islamic creationism is the belief that the universe (including humanity) was directly created by Allah as in the Qur'an. Currently, Islam takes religious texts literally. Many scholars say that Genesis is a corrupted version of God's message. There is also a creation myth in the Qu'ran, but it is more vague than Genesis. This allows for more interpretation. Several liberal movements within Islam generally accept the scientific positions on the age of the earth, the age of the universe and evolution.

Islam also has its own form of Theistic evolution, which says that mainstream scientific analysis of the origin of the universe is supported by the Qur'an. Many liberal Muslims believe in evolutionary creationism.

Khalid Anees, president of the Islamic Society of Britain attended a conference called 'Creationism: Science and Faith in Schools'. During that conference, he made points including the following: There is no contradiction between what is revealed in the Koran and natural selection and survival of the fittest. However, some Muslims, such as Adnan Oktar, do not agree that one species can develop from another. Other Muslims do believe that one species can develop from another.

There are several verses in the Qur'an which some modern writers have interpreted as being compatible with the expansion of the universe, Big Bang and Big Crunch theories:

"Do not the Unbelievers see that the skies (space) and the earth were joined together, then We clove them asunder and We created every living thing out of the water. Will they not then believe?"[Qur'an 21:30]

"Then turned He to the sky (space) when it was smoke, and said unto it and unto the earth: Come both of you, willingly or loth. They said: We come, obedient."[Qur'an 41:11]

"On the day when We will roll up the sky (space) like the rolling up of the scroll for writings, as We originated the first creation, (so) We shall reproduce it; a promise (binding on Us); surely We will bring it about."[Qur'an 21:104]

The Bahá'í Faith considers the creation narratives in previous Abrahamic religions to be symbolic and not literal. Bahá'í Faith also accepts that the Earth is ancient. Baha'ullah existed at the same time as Charles Darwin, so was aware of Darwin's works.

Religious communities in the United States encourage the inclusion of supernatural explanations of the origins of both life and the universe as a whole. Evolution was not included in school textbooks until the 1960s. In 1987, the United States Supreme Court acknowledged creationism is not scientific, and should not be taught in public schools.

All content from Kiddle encyclopedia articles (including the article images and facts) can be freely used under Attribution-ShareAlike license, unless stated otherwise. Cite this article:
Creationism Facts for Kids. Kiddle Encyclopedia.