The hoatzin (Opisthocomus hoazin) is a tropical bird found in swamps, river forests, and mangroves of the Amazon and the Orinoco delta in South America.

They are the only bird which eats leaves as a main part of their diet. Their gut has special adaptations which help their digestion.

The hoatzin is also notable for having young with claws on two of their wing digits. They are the only living member of the family Opisthocomidae. Its close relatives probably died out long ago. There has been much debate about the hoatzin's relationships with other birds.

The hoatzin is the only bird that digests leaves. Their odor has been compared to fresh cow dung. The odor is caused by their digestive system.

The hoatzin eats the leaves and some fruits and flowers of plants which grow in the wet habitats where it lives. It clambers around clumsily among the branches. Once it was thought that the species only could eat the leaves of arums and mangroves, but the species does eat the leaves of more than fifty species. One study undertaken in Venezuela found that the hoatzin diet was 82% leaves, 10% flowers, and 8% fruit. 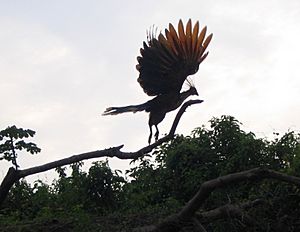 One of this species' many peculiarities is that it has a digestive system unique amongst birds. Hoatzins use bacterial fermentation in the front part of the gut to break down the vegetable material, much as cattle and other ruminants do. Unlike ruminants, however, which have the rumen (a specialized stomach for bacterial fermentation), the hoatzin has an unusually large crop, folded in two chambers, and a large, multi-chambered lower oesophagus. Its stomach chamber and gizzard are much smaller than in other birds.

The crop of the hoatzin is so large that it displace the flight muscles and keel of the sternum. This is why they fly so poorly. Because of aromatic compounds in the leaves they eat, and the bacterial fermentation, the bird has a disagreeable, manure-like odor. It is only hunted by humans for food in times of great need. If the bird feeds on insects or other animal matter, that is purely accidental. 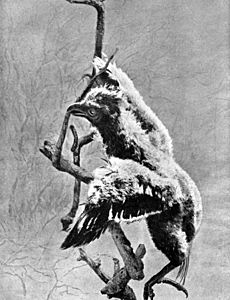 The newly hatched bird has claws on its thumb and first finger enabling it to dexterously climb tree branches until its wings are strong enough for sustained flight. These claws are gone by the time the bird reaches adulthood.

Hoatzins are seasonal breeders, breeding during the rainy season, the exact timing of which varies across its range.

Hoatzins are gregarious and nest in small colonies, laying two or three eggs in a stick nest in a tree hanging over water in seasonally flooded forests.

The chicks, which are fed on regurgitated fermented food, have another odd feature; they have two claws on each wing. Immediately on hatching, they can use these claws, and their oversized feet, to scramble around the tree branches without falling into the water.

When predators such as the great black hawk attack a hoatzin nesting colony, the adults fly noisily about, trying to divert the predator's attention, while the chicks move away from the nest and hide among the thickets. If discovered, however, they drop into the water and swim under the surface to escape, then later use their clawed wings to climb back to the safety of the nest.

All content from Kiddle encyclopedia articles (including the article images and facts) can be freely used under Attribution-ShareAlike license, unless stated otherwise. Cite this article:
Hoatzin Facts for Kids. Kiddle Encyclopedia.