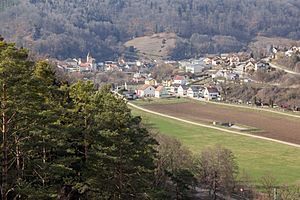 Solnhofen is a German town. The town is in the Altmühl river valley. Its municipality is in the district of Weißenburg-Gunzenhausen in the region of Middle Franconia. The region is in Bavaria, Germany.

The local area is famous in geology and archaeology for the Solnhofen limestone. This is a very fine-grained limestone from the Upper Jurassic period. It is an exceptionally fine Lagerstätte that preserves detailed fossil specimens. Alois Senefelder used specially prepared blocks of the fine Solnhofen limestone for the process of lithography which he invented in 1798. The quarrying of this lithographic limestone later yielded spectacular finds, including Archaeopteryx, commemorated in the bird's full name Archaeopteryx lithographica. All 13 known specimens have come from the Solnhofen area.

All content from Kiddle encyclopedia articles (including the article images and facts) can be freely used under Attribution-ShareAlike license, unless stated otherwise. Cite this article:
Solnhofen Facts for Kids. Kiddle Encyclopedia.