Paraves are a widespread group of theropod dinosaurs that originated in the Late Jurassic period. In addition to the extinct dromaeosaurids, troodontids, anchiornithids, and scansoriopterygids, the group also contains the avialans, among which are the over ten thousand species of living birds. Primitive members of Paraves are well known for the possession of an enlarged claw on the second digit of the foot, which was held off the ground when walking in some species.

Like other theropods, all paravians are bipedal, walking on their two hind legs.

The teeth of primitive paravians were curved and serrated, but not blade-like except in some specialized species such as Dromaeosaurus albertensis. The serrations on the front edge of dromaeosaurid and troodontid teeth were very small and fine, while the back edge had serrations which were very large and hooked.

Most of the earliest paravian groups were carnivorous, though some smaller species (especially among the troodontids and early avialans) are known to have been omnivores, and it has been suggested that an omnivorous diet was the ancestral state for this group, with strict carnivory evolving in some specialized lineages. Fossils also suggest that legs and feet covered with feathers was an ancestral condition, possibly having originated in the Coelurosauria, even if this trait was later lost in more advanced birds.

Paravians generally have long, winged forelimbs, though these have become smaller in many flightless species and some extinct lineages that evolved before flight. The wings usually bore three large, flexible, clawed fingers in early forms. The fingers became fused and stiffened and the claws highly reduced or lost in some advanced lineages. An increasingly asymmetric wrist joint, a trend that can be traced back to primitive coelurosaurs, allowed the forelimbs to elongate and an elaboration of their plumage, traits that made the evolution of flapping flight possible.

Many early members of Paraves had both well-developed wings and long feathers on the hind legs, which in some cases, formed a second set of airfoils. These species, most famously represented by Microraptor gui, have often been referred to as "four winged dinosaurs". Though it has been suggested that these hind wings would have prevented some paravians from getting around on the ground, and that they must have lived in trees, there is very little evidence that any of the earliest paravians were capable of climbing. This apparent paradox was addressed by later studies which showed that early paravians like Microraptor were capable of flapping flight and powered launching from the ground into the air without relying on climbing. Microraptor in particular also seems to represent a case of flight evolving independently of the bird lineage within Paraves.

Most theropods walked with three toes contacting the ground, but fossilized footprint tracks confirm that many basal paravians, including dromaeosaurids, troodontids, and some early avialans, held the second toe off the ground in a hyperextended position, with only the third and fourth toes bearing the weight of the animal. This is called functional didactyly. The enlarged second toe bore an unusually large, curved sickle-shaped claw (held off the ground or 'retracted' when walking). This claw was especially large and flattened from side to side in the large-bodied predatory eudromaeosaurs. In these early species, the first toe (hallux) was usually small and angled inward toward the center of the body, but only became fully reversed in more specialized members of the bird lineage. One species, Balaur bondoc, possessed a first toe which was highly modified in parallel with the second. Both the first and second toes on each foot of B. bondoc were held retracted and bore enlarged, sickle-shaped claws. 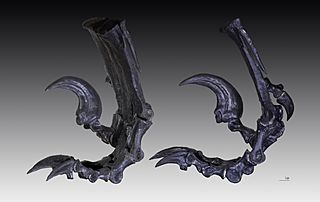 One of the best-known features of paravians is the presence of an enlarged and strongly curved "sickle claw" on a hyper-extendible second toe, modified to hold the sickle claw clear of the ground when walking, most notably developed in the dromaeosaurids and troodontids. While this characteristic claw and its associated modifications to the anatomy of the foot (such as a shortened metatarsus in eudromaeosaurs) had been known since the mid-20th century, their possible functions were the subject mainly of speculation, and few actual studies were published. Initial speculation regarded the claws as slashing implements used to disembowel large prey. In this scenario, the shortened upper foot would serve as an anchor point for powerful tendons to improve kicking ability. However, subsequent studies of the actual claw shape showed that the underside of the claw was only weakly keeled and would not have been an effective cutting instrument. Instead, it appeared to be more of a hooking implement. Manning et al. suggested in 2006 that the claws were similar to crampons and were used for climbing, and in the case of larger species or individuals, climbing up the flanks of very large prey.

A larger study of sickle-claw function, published in 2011 by Fowler and colleagues, concluded that the earlier study by Manning and colleagues was correct and that the "sickle claws" would have been ineffective as cutting weapons. They compared the claw and overall foot anatomy of various primitive species with modern birds to shed light on their actual function. Fowler and colleagues showed that many modern predatory birds also have enlarged claws on the second toes. In modern raptors, these claws are used to help grip and hold prey of sizes smaller than or equal to the predator, while the birds use their body weight to pin their prey to the ground and eat it alive. Fowler and colleagues suggested that this behavior is entirely consistent with the anatomy of advanced dromaeosaurids like Deinonychus, which had slightly opposing first toes and strong tendons in the toes and foot. This makes it likely that advanced dromaeosaurids also used their claws to puncture and grip their prey to aid in pinning it to the ground, while using shallow wing beats and tail movements to stabilize themselves. Other lines of evidence for this behavior include teeth which had large, hooked serrations only on the back edge (useful in pulling flesh upward rather than slicing it) and large claws on the wings (for greater maneuvering of prey while mantling it with the wings).

In more primitive dromaeosaurids and in troodontids, the feet were not as specialized and the claws were not as large or as hooked. Additionally, the toe joints allowed more range of motion than the simple up-down movements of advanced dromaeosaurids. This makes it likely that these species specialized in smaller prey that could be pinned using only the inner toes, not requiring the feet to be as strong or sturdy.

All content from Kiddle encyclopedia articles (including the article images and facts) can be freely used under Attribution-ShareAlike license, unless stated otherwise. Cite this article:
Paraves Facts for Kids. Kiddle Encyclopedia.