Dromaeosaurus was a genus of theropod dinosaur which lived during the Upper Cretaceous period, about 75 million years ago. Its remains were found in the western United States and Alberta, Canada.

Dromaeosaurus albertensis was a small carnivore, the size of a wolf, about 2 m (7 ft) in length and 15 kg (40 lb) in weight. Its mouth was full of sharp teeth, and it had a large "sickle claw" on each foot. It lived during the Upper Cretaceous: some teeth which may belong to it have been found from the latest Cretaceous, 65.5 million years ago.

Although only a few bones are known from the hind limb, they indicate that Dromaeosaurus was a powerfully built animal. The presence of feathers in closely related animals makes it extremely likely that it was feathered as well.

Dromaeosaurus had large eyes and excellent vision. It also probably had a good sense of smell and hearing. Its neck was curved and flexible and its jaws were solidly built. The tail was flexible at the base but sheathed in a lattice of bony rods; this allowed it to be carried in an upturned position.

Despite widespread attention in popular books about dinosaurs, and complete mounted skeleton casts in many museums, Dromaeosaurus is surprisingly poorly known from actual fossils. The popular cast by the Tyrrell Museum was only made possible by knowledge gained from other dromaeosaurs discovered more recently.

The first known Dromaeosaurus remains were discovered by paleontologist Barnum Brown during a 1914 expedition to Red Deer River on behalf of the American Museum of Natural History.

Matthew and Brown originally placed Dromaeosaurus within "Deinodontidae" (now known as Tyrannosauridae), based on some similarities in the general proportions of the skull. In 1969, John Ostrom recognized that Dromaeosaurus shared many features with Velociraptor and the newly-discovered Deinonychus, and assigned these forms to a new family: Dromaeosauridae. 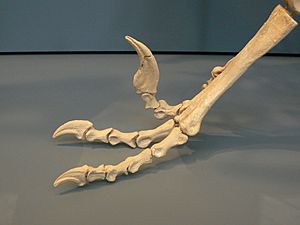 Dromaeosaurus differs from most of its relatives in having a short, massive skull, a deep mandible, and robust teeth. The teeth tend to be more heavily-worn than those of its relative Saurornitholestes, suggesting that its jaws were used for crushing and tearing rather than simply slicing through flesh. Dromaeosaurus had a bite nearly three times as powerful as that of a Velociraptor.

It is possible that, unlike most other dromaeosaurs, Dromaeosaurus relied more on its jaws than its claws to dispatch its prey. It was probably better suited to tackling large prey than the more lightly-built Saurornitholestes.

The relationships of Dromaeosaurus are unclear. Although its rugged build gives it a primitive appearance, it was actually a very specialized animal. It is usually given its own subfamily, the Dromaeosaurinae; this group is thought to include Utahraptor, Achillobator, Adasaurus, and possibly Deinonychus. However, the relationships of dromaeosaurs are still in a state of flux.

Dromaeosaurus are featured in Walking with Dinosaurs, stalking juvenile Torosaurus and attempting to steal eggs from Tyrannosaurus, despite never coexisting with the latter in real life. Dromaeosaurus makes an appearance in Jurassic Fight Club, where a pack is shown being capable of taking down Edmontosaurus in spite of the carnivores' small size, but the carcass is later taken by a Tyrannosaurus (despite the tyrannosaur not being contemporaneous with Dromaeosaurus).

All content from Kiddle encyclopedia articles (including the article images and facts) can be freely used under Attribution-ShareAlike license, unless stated otherwise. Cite this article:
Dromaeosaurus Facts for Kids. Kiddle Encyclopedia.