Barnum Brown (February 12, 1873 – February 5, 1963), often called Mr. Bones, was an American field paleontologist. He discovered the first documented remains of Tyrannosaurus rex. His career that made him one of the most famous fossil hunters working in the late Victorian era and the early 20th century.

He was sponsored by the American Museum of Natural History (AMNH). He was Henry Fairfield Osborn's man in the field. Brown worked the country, bargaining and trading for fossils. Often, he simply sent money to have fossils shipped to the AMNH.

After working a handful of years in Wyoming for AMNH in the late 1890s, Brown led an expedition to the Hell Creek Formation of Southeastern Montana. There, in 1902, he discovered and excavated the first documented remains of Tyrannosaurus rex. 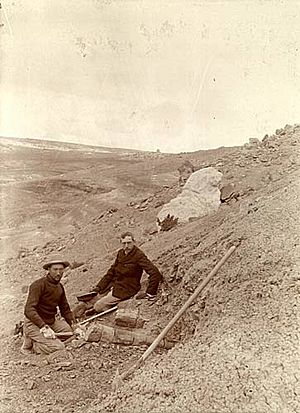 All content from Kiddle encyclopedia articles (including the article images and facts) can be freely used under Attribution-ShareAlike license, unless stated otherwise. Cite this article:
Barnum Brown Facts for Kids. Kiddle Encyclopedia.