Rahonavis is a genus of bird-like feathered dinosaur from the Upper Cretaceous, 70–65 million years ago (mya) of what is now northwestern Madagascar.

It is known from a partial skeleton found in a quarry. Rahonavis was a small predator, at about 70 centimetres (2.3 ft) long, with the typical Velociraptor-like raised sickle claw on the second toe.

Rahonavis has quill knobs on its ulna (forearm bone), which led at first to its inclusion among the birds. However, the rest of the skeleton is rather typically dromaeosaurid.

Makovicky and colleagues consider Rahonavis to be closely related to the South American dromaeosaurids Unenlagia and Buitreraptor, and thus a member of the subfamily Unenlagiinae. Norell and colleagues (2006) also found Rahonavis to lie within the Unenlagiinae, as the sister taxon to Unenlagia itself. A 2007 study by Turner and colleagues again found it to be closely related to Unenlagia. However, studies published since 2009 that have found many traditional "dromaeosaurids", including the unenlagiines, closer to Avialae than to dromaeosaurines. A cladistic analysis recovered Rahonavis as a probable relative of Jeholornis and Jixiangornis. 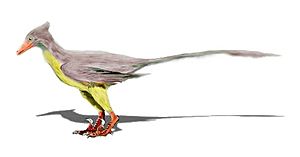 Rahonavis was one-fifth larger than the closely related Archaeopteryx, about the size of a modern raven.

Although numerous artists' reconstructions of Rahonavis show it in flight, it is not clear that it could fly. There is even been some doubt that the forearm material, which includes the quill knobs, belongs with the rest of the skeleton. Some researchers have suggested that Rahonavis represents a chimaera, with the forelimb of a bird mixed with the skeleton of a dromaeosaurid.

The nearby discovery of the primitive bird Vorona berivotrensis shows that the possibility of a mix-up cannot be entirely excluded. However, many other scientists, including the original describers of Rahonavis, think its remains belong to a single animal. The wing bones are close to the rest of the skeleton. All the bones attributed to Rahonavis were buried in an area "smaller than a letter-sized page", according to co-describer Luis M. Chiappe in his 2007 book Glorified Dinosaurs. Chiappe maintained that Rahonavis could probably fly, noting that its ulna was large and robust compared to Archaeopteryx, and that this fact, coupled with the prominent quill knobs, suggest that Rahonavis had larger and more powerful wings than that earlier bird. In addition, Rahonavis shoulder bones show evidence of ligament attachments allowing the independent mobility needed for flapping flight. Chiappe concluded that Rahonavis was capable of flight, though it would have been more "clumsy in the air than modern birds".

All content from Kiddle encyclopedia articles (including the article images and facts) can be freely used under Attribution-ShareAlike license, unless stated otherwise. Cite this article:
Rahonavis Facts for Kids. Kiddle Encyclopedia.