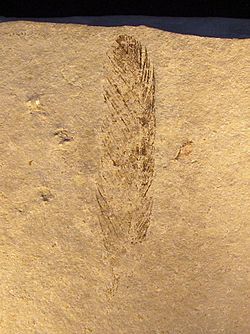 A feathered dinosaur is a dinosaur with feathers. It is now thought that all coelurosaurs, and perhaps all theropods, had feathers.

Most of these fossils come from the Yixian formation in China. The fossil feathers of one specimen, Shuvuuia deserti, have been tested positive for beta-keratin in immunological tests. This is the main protein in bird feathers. 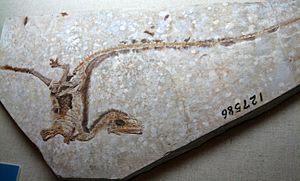 After a century without clear evidence, well-preserved fossils of feathered dinosaurs were discovered during the 1990s, and more continue to be found. The fossils were preserved in a Lagerstätte — a sedimentary deposit exhibiting remarkable richness and completeness in its fossils — in Liaoning, China.

The area had repeatedly been smothered in volcanic ash by eruptions in Inner Mongolia 124 million years ago, during the Lower Cretaceous. The fine-grained ash preserved the living organisms that it buried in fine detail. The area was teeming with life, with millions of leaves, angiosperms (the oldest known), insects, fish, frogs, salamanders, mammals, turtles, lizards and crocodilians discovered to date.

The most important discoveries at Liaoning have been a host of feathered dinosaur fossils, with a steady stream of new finds filling in the picture of the dinosaur-bird connection and adding more to theories of the evolutionary development of feathers and flight. Quill knobs were found an ulna of Velociraptor mongoliensis. These are associated with large, well-developed secondary feathers. 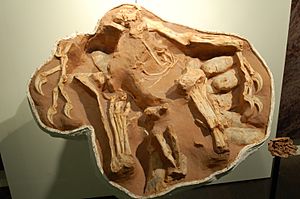 A nesting Citipati osmolskae specimen, at the AMNH.

Behavioural evidence, in the form of an oviraptorosaur on its nest, showed another link with birds. Its forearms were folded, like those of a bird. Although no feathers were preserved, it is likely that these would have been present to keep eggs and juveniles warm.

The feathered tail of a non-avialan (non-bird) theropod has been found preserved in mid-Cretaceous (∼99 mya) amber from Kachin State, Myanmar (Burma). The BBC describe it as "perfectly preserved". Lida Xing found it at an amber market in Myitkina, Myanmar. The amber was already polished for jewellery: the seller thought it was plant material. However, it was the tail of a feathered dinosaur about the size of a sparrow. The feathers were not flight feathers. Dr Paul Barrett, from London's Natural History Museum, called the specimen a "beautiful fossil", describing it as a "really rare occurrence of vertebrate material in amber".

In 2011, samples of amber were discovered to contain preserved feathers from the Cretaceous period, with evidence that they were from both dinosaurs and birds. Initial analysis suggests that some of the feathers were used for insulation, and not flight. 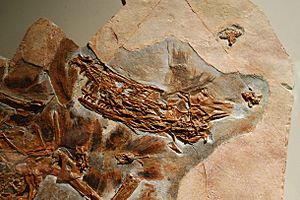 Fossil of Sinornithosaurus, the first evidence of feathers in dromaeosaurids 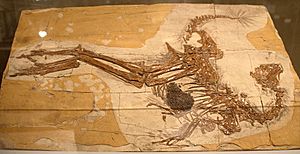 Cast of a Caudipteryx fossil with feather impressions and stomach content 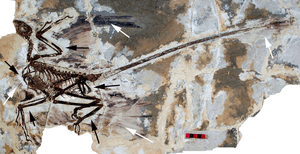 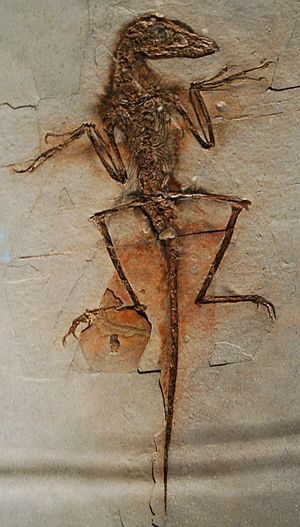 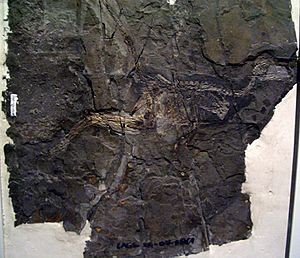 A number of non-avialan dinosaurs are now known to have been feathered. Direct evidence of feathers exists for the following genera, listed in the order currently accepted evidence was first published.

The evidence consists of feather impressions, or convincing skeletal or chemical evidence. Skeletal evidence would be the presence of quill knobs (the anchor points for wing feathers on the forelimb) or a pygostyle (the fused vertebrae at the tail tip which often supports large feathers).

For comparison: Archaeopteryx (1861; avialan) definitely had working flight feathers with off-centre rachis (stem). Otherwise, apart from the front limbs, it was a typical small carnivorous dinosaur.

All content from Kiddle encyclopedia articles (including the article images and facts) can be freely used under Attribution-ShareAlike license, unless stated otherwise. Cite this article:
Feathered dinosaur Facts for Kids. Kiddle Encyclopedia.