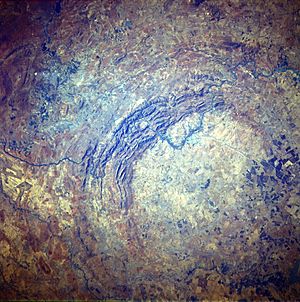 The Vredefort crater is believed to have formed in this period.

The Orosirian is the third geological period in the Palaeoproterozoic. It began 2.05 billion years ago (bya) and ended at 1.8 bya.

The latter half of the period was a time of mountain-building on nearly all continents. It was the time when the supercontinent Columbia began to form.

Two of the largest known impact events on Earth happened during the Orosirian. At the beginning of the period, 2023 million years ago (mya), a large asteroid hit the earth and created the Vredefort impact structure. The event that created the Sudbury Basin structure happened near the end of the period about 1850 mya.

All content from Kiddle encyclopedia articles (including the article images and facts) can be freely used under Attribution-ShareAlike license, unless stated otherwise. Cite this article:
Orosirian Facts for Kids. Kiddle Encyclopedia.