The Sudbury Basin is a major geologic structure in Ontario, Canada. It is the second-largest verified impact crater on Earth, as well as one of the oldest.

The basin is on the Canadian Shield in the city of Greater Sudbury, Ontario. The Sudbury Basin is referred to locally as "The Valley". The urban core of the former city of Sudbury lies on the southern outskirts of the basin.

The Sudbury Basin is near a number of other geological structures. None of the structures are directly related to each other in the sense of coming from the same geophysical processes.

The Sudbury basin was formed by a strike from a bolide about 10–15 km (6.2–9.3 mi) in diameter. It occurred 1.849 billion years ago in the Palaeoproterozoic era. 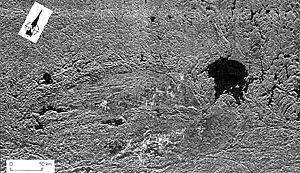 With such a large impact, debris was most likely scattered globally, but has since been worn away. Its present size is believed to be a smaller portion of a 250 km (160 mi) round crater that the bolide originally created.

Subsequent geological processes have deformed the crater into the current smaller oval shape. Sudbury Basin would then be the second-largest crater on Earth, after the 300 km (190 mi) Vredefort crater in South Africa, and larger than the 170 km (110 mi) Chicxulub crater in Yucatán, Mexico.

All content from Kiddle encyclopedia articles (including the article images and facts) can be freely used under Attribution-ShareAlike license, unless stated otherwise. Cite this article:
Sudbury Basin Facts for Kids. Kiddle Encyclopedia.