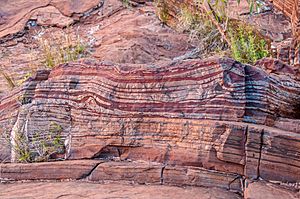 The Siderian is the first geological period in the Palaeoproterozoic that began 2.5 billion years ago, and ended at 2.3 billion years ago. Before it was the Neoarchaean It is followed by the Rhyacian.

Banded iron formations (BIFs) became very abundant early this period. BIFs were formed as anaerobic algae produced waste oxygen that combined with iron, forming magnetite (Fe3O4, an iron oxide). This process cleared iron from the oceans, presumably turning greenish seas clear. Eventually, without an oxygen sink in the oceans, the process created the oxygen-rich atmosphere of today. This event is known as the oxygen catastrophe, which according to some geologists triggered the Huronian glaciation. The Huronian glaciation took place in the Siderian between 2400 Mya and 2300 Mya.

All content from Kiddle encyclopedia articles (including the article images and facts) can be freely used under Attribution-ShareAlike license, unless stated otherwise. Cite this article:
Siderian Facts for Kids. Kiddle Encyclopedia.