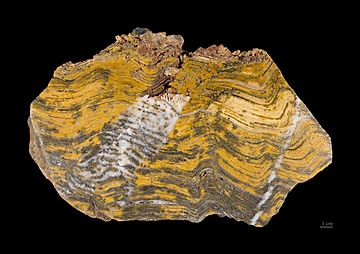 A stromatolite formed by Paleoarchean miocrobial mats, preserved as a fossil, from Pilbara craton, Western Australia

The Paleoarchean, also spelled Palaeoarchaean (formerly known as early Archean), is a geologic era within the Archaean Eon. It spans the period of time 3,600 to 3,200 million years ago—the era is defined chronometrically and is not referenced to a specific level of a rock section on Earth. The name derives from Greek "Palaios" ancient. The oldest ascertained life form of fossilized bacteria in microbial mats, 3,480 million years old, found in Western Australia, is from this era. The first supercontinent Vaalbara formed during this period.

During this era, a large asteroid, about 37 to 58 kilometres (23–36 mi) wide, collided with the Earth in the area of South Africa about 3.26 billion years ago, creating the features known as the Barberton greenstone belt.

All content from Kiddle encyclopedia articles (including the article images and facts) can be freely used under Attribution-ShareAlike license, unless stated otherwise. Cite this article:
Paleoarchean Facts for Kids. Kiddle Encyclopedia.