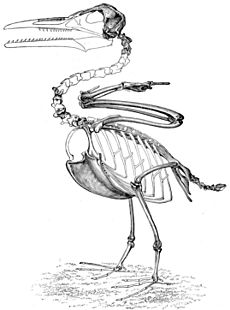 Ichthyornis (meaning "fish bird") was a tern-like bird which lived 93-83.5 million years ago in the Upper Cretaceous. It lived in flocks, nested on shorelines, and hunted for fish in the Western Interior Seaway, a huge inland sea in what is now North America.

Ichthyornis was about 8 inches (20 cm) long. It had a large head, toothed jaws, and a long beak. This powerful flyer is the oldest-known bird that had a keeled breastbone (sternum) similar to that of modern birds.

Ichthyornis was originally found in 1872 in Kansas by Benjamin Franklin Mudge, a professor from Kansas State Agricultural College. Othniel C. Marsh of Yale University described and named the first fossils. Fossils of the bird have been found in Kansas, Texas and Alberta.

All content from Kiddle encyclopedia articles (including the article images and facts) can be freely used under Attribution-ShareAlike license, unless stated otherwise. Cite this article:
Ichthyornis Facts for Kids. Kiddle Encyclopedia.