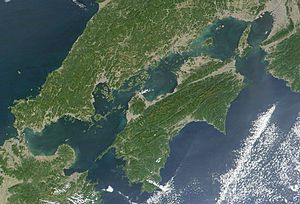 Formally named the Seto Inland Sea, the Inland Sea is the body of water separating Honshū, Shikoku, two of the main islands of Japan, and Kyūshū

Inland seas, also called epeiric or epicontinental seas, are shallow seas over part of a continent.

They usually happen with marine transgressions, when the sea overtops the land. They are caused by either global high ('eustatic') sea level or the formation of large geologic basins which eventually connect to the ocean.

There have been, at some periods, shallow seas inside continents. Much of present-day North America was covered by an epicontinental sea called the Sundance Sea during the Jurassic period. In the Cretaceous an even larger area was covered by the Western Interior Seaway. A modern example is the Baltic Sea. The North Sea is not an inland sea, but it does sit on continental shelf, and so is epeiric (that is what the word means). The Hudson Bay is often considered an epeiric sea because its depth averages 100ft (30 m) whereas, for example, the Bay of Bengal is 2,600 metres deep. So epeiric seas are on the continental plate, as are inland seas. The inland seas, however, are more enclosed.

The Amazon basin originally emptied into the Pacific Ocean when South America and Africa were part of Gondwana.

After the breakup of Gondwana, the Amazon found its exit blocked by the rise of the Andes about 15 million years ago (mya). A great inland sea developed, at times draining north through what is now Venezuela before finding its present eastward outlet into the South Atlantic. Gradually this inland sea became a vast freshwater lake and wetlands where sediment flattened its profiles and the marine inhabitants adapted to life in freshwater. Over 20 species of stingray, most closely related to those found in the Pacific Ocean, live today in the freshwaters of the Amazon, which is also home to a freshwater dolphin. In 2005 fossilized remains of a giant crocodile, estimated to have been 46 ft (14m) in length, were discovered in the northern rainforest of Amazonian Peru.

The Mediterranean Sea looks like a clear-cut example of an inland sea, but its deepest point is 5,267 m (17,280 ft) in the Calypso Deep of the Ionian Sea. The Mediterranean is a genuine sea which has been squashed almost out of existence by the movement of Africa against the European tectonic plate. It was formerly part of the ancient Tethys Ocean, which surrounded the old global supercontinent of Pangaea. So the Mediterranean is different from those inland seas which sit on top of continental plates.

The Black Sea, on the other hand, is a genuine inland sea because it sits on continental plates which have subsided.

A vast inland sea extended from the Gulf of Mexico deep into present-day Canada during the Cretaceous. It split the continent of North America into two halves, Laramidia and Appalachia, for most of the mid- and late-Cretaceous period. It was 2,500 feet (760 m) deep, 600 miles (970 km) wide and over 2,000 miles (3,200 km) long.

The Sundance Sea existed in North America during the mid to late Jurassic period of the Mesozoic Era. It was an arm of what is now the Arctic Ocean, and extended through what is now western Canada into the central western United States. The sea receded when highlands to the west began to rise. The sedimentary rocks which formed in and around the Sundance Sea are often rich in fossils.

All content from Kiddle encyclopedia articles (including the article images and facts) can be freely used under Attribution-ShareAlike license, unless stated otherwise. Cite this article:
Inland sea Facts for Kids. Kiddle Encyclopedia.