Not the fictional town from the Halloween film series.

Haddonfield was incorporated by an act of the New Jersey Legislature on April 6, 1875, within portions of Haddon Township following a referendum on the same day. The borough became an independent municipality in 1894. The borough was named for Elizabeth Haddon, an early settler of the area.

The Haddonfield area was occupied by Lenni Lenape Native Americans. The Lenape disappeared from the local area when settlers arrived. Arrowheads and pottery shards have been found by residents by the banks of the Cooper River, hinting that there was a Native American settlement in Haddonfield at one point in time. 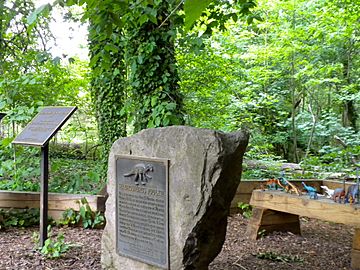 Plaques at the Hadrosaurus Foulkii Leidy Site showing National Historic Landmark status (left) and a plaque from Philadelphia's Academy of Natural Sciences. At right, toy dinosaurs have been left by visitors. A deep pit or ravine is straight ahead about 10 yards

On October 23, 1682, Francis Collins, an English Quaker and a bricklayer by trade, became the first settler within the boundaries of what today is Haddonfield. Collins soon built a house, "Mountwell," on a tract of 400 acres. Haddonfield was further developed by Elizabeth Haddon (1680–1762), whose Quaker father, John Haddon, bought a 500 acres (2.0 km2) tract of land in the English colony of West Jersey to escape religious persecution. Elizabeth set sail alone from Southwark, England to the New World in 1701. Shortly after her arrival, she made a marriage proposal to John Estaugh, a Quaker minister, and they were married in 1702. The town was named for John Haddon, though he never came to America.

The Indian King Tavern, built in 1750, played a significant role in the American Revolutionary War. During that war, the New Jersey Legislature met there, avoiding British forces, and in 1777, declared New Jersey to be an independent state. Today the tavern is a state historical site and museum. Nevertheless, since 1873, Haddonfield has been a dry town where alcohol cannot be sold.

Haddonfield is a significant historic paleontology site. In 1838, William Estaugh Hopkins uncovered large bones in a marl pit in which he was digging. Hopkins displayed the bones at his home, Birdwood; and these bones sparked the interest of a visitor, William Foulke. In 1858, Foulke dug from the marl pit the first relatively complete skeleton of a dinosaur found in North America, Hadrosaurus foulkii. The skeleton was assembled in 1868 and is still displayed at Philadelphia Academy of Natural Sciences. A 12-foot (3.7 m) replica of "Haddy" stands in the center of town.

In 1875, Haddonfield became the first community to secede from Haddon Township and become a self-governing borough. Haddonfield is noted for its historic homes, quaint shops, and legions of lawyers. As a legal center for southern New Jersey, the town houses the offices of more than 390 attorneys.

Haddonfield once was home to Symphony in C (formerly the Haddonfield Symphony), which is now based in nearby Collingswood, and performs at the Gordon Theater at Rutgers University-Camden.

Haddonfield is home to the second oldest volunteer fire company in continuous service in the United States. Haddon Fire Company No. 1 was established as Friendship Fire Company on March 8, 1764, by 26 townsmen. Each member was to furnish two leather buckets while the company supplied six ladders and three fire hooks.

In 1971, Haddonfield became the second municipality in New Jersey (after Cape May) to establish a historic preservation district. In keeping with the historic appearance of the borough, some candidates for commissioner distribute colored ribbons to their supporters instead of yard signs.

There were 4,436 households out of which 36.0% had children under the age of 18 living with them, 61.7% were married couples living together, 7.8% had a female householder with no husband present, and 28.3% were non-families. 24.9% of all households were made up of individuals, and 11.9% had someone living alone who was 65 years of age or older. The average household size was 2.61 and the average family size was 3.17.

There are events such as the community sidewalk sale in the summer, and the fall festival in October. The fall festival is an event where community organizations may have booths along Kings Highway and there is scarecrow-making for kids. Haddonfield hosts a weekly farmers' market on Saturdays from May to November. There is also the Haddonfield Crafts & Fine Arts Festival, where a large variety of vendors line the main street. Another event is First Night, a New Year's Eve celebration of the arts, with a variety of performances. There is also a yearly car show that takes place during the second Saturday of September. There are also events such as historic house tours and designer show houses.

Haddonfield prides itself in being walkable; most streets have sidewalks, and due to the small size of the town — 2 miles (3.2 km) or less from any point in Haddonfield to any other as the crow flies — it is possible to walk to any part of the community. The Borough presently has a traffic campaign using the slogan "Haddonfield Drives 25" promoting the borough's speed limit as 25 mph (40 km/h) for all streets and roadways.

Route 41 (Kings Highway) passes through the center of the borough and intersects CR 561 (Haddon Avenue) at Haddonfield's main business district. I-295 passes through at the southern tip with Exit 31 straddling the border. The New Jersey Turnpike also touches the town boundary, but the closest exit is Interchange 3 in Bellmawr/Runnemede. 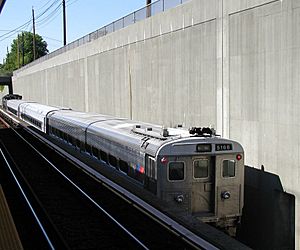 The PATCO Speedline Haddonfield station links it to Philadelphia, Pennsylvania, in the west and to the eastern terminus in Lindenwold, New Jersey, where it is possible to transfer to NJ Transit's bus and rail routes connecting Philadelphia to Atlantic City.

NJ Transit provides local bus service; its 451, 455 and 457 routes all stop at the PATCO station.

All content from Kiddle encyclopedia articles (including the article images and facts) can be freely used under Attribution-ShareAlike license, unless stated otherwise. Cite this article:
Haddonfield, New Jersey Facts for Kids. Kiddle Encyclopedia.