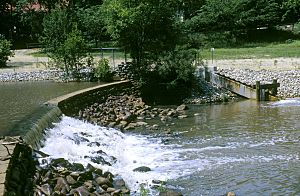 The Cooper River is a tributary of the Delaware River in southwestern New Jersey in the United States.

The confluence of the Cooper River with the Delaware River is in Camden. The Cooper River serves as a border between Cherry Hill and Haddon Township, Haddonfield, and Lawnside.

The Cooper River (known upstream near Haddonfield as Cooper's Creek) was named after the Cooper family, who were some of the first European settlers in the area of Camden County, New Jersey. This tributary of the Delaware River is 16 miles (25.7 km) long measuring from its headwater in Gibbsboro (it is notable that the Northern Branch begins in Voorhees Township). The Cooper River Watershed covers 40 square miles (100 km2), and includes the tributaries Chandlers Run, Millard Creek, Nicholson Branch, the North Branch, and Tindale Run (the last two being the most significant). Although historically a tidal river (the most severe tide reportedly reached Kings Highway), all present tidal influence stops at the Kaighn Avenue Bridge, in Camden, where it is impounded.

The Camden County Boathouse sits on the banks of the Cooper River in Pennsauken Township and is home to eight area rowing clubs, which are active February through November.

The Cooper River Yacht Club is situated on the Cooper River in Collingswood and offers sailing instruction courses during the summer to children and adults, as well as organizing racing events from time to time.

Using a canoe, people can navigate the Cooper from its mouth to southern Haddonfield; however, it is necessary to cross several impoundments. Canoeing the Cooper into and farther than Greenwald Park in Cherry Hill is technically a violation of local watercraft laws.

Fishing in the river has improved since the installation of fish ladders along the impoundments. In season, small fish such as sunnies and smallmouth bass can be caught.

Since 1955, the Cooper River has been the site of the Intercollegiate Rowing Association's IRA Championship Regatta, which is considered to be the United States collegiate national championship of rowing.

The trail around the river regularly hosts community races such as the 9/11 Heroes Run hosted by the Travis Manion Foundation.

All content from Kiddle encyclopedia articles (including the article images and facts) can be freely used under Attribution-ShareAlike license, unless stated otherwise. Cite this article:
Cooper River (New Jersey) Facts for Kids. Kiddle Encyclopedia.