Since 1873, owing in part to its Quaker history, Collingswood was founded as a dry town where alcohol cannot be sold, however restaurant patrons are permitted to bring their own wine and beer to consume. In July 2015, the town introduced an ordinance that will allow craft breweries to operate in the town but not serve food. The ordinance is expected to be passed in August 2015. Under the terms of a limited license, Devil's Creek Brewery opened a tasting room in May 2016 where beers made by the microbrewery are available for sale to the public. A state ordinance also allows select restaurants to serve wine produced by New Jersey vineyards. 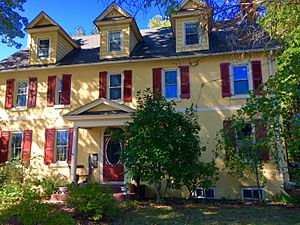 Quakers settled along Newton Creek and Cooper River in the late 17th Century, establishing what was known as the Newton Colony and eventually Newton Township. Much of what is now Collingswood was a farm owned by members of the Collings family during the 18th and 19th Centuries. Later a section of Haddon Township, Collingswood was incorporated as a borough by an act of the New Jersey Legislature on May 22, 1888, based on the results of a referendum held that same day. That same year, town resident Edward Collings Knight, a wealthy philanthropist, donated the land that became Knight Park. Knight was a descendant of the Collings family for whom the borough is named. 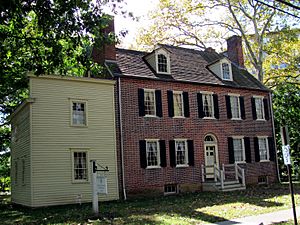 Collingswood has several historic homes including the 1820s-era house of the Collings family, known as the Collings-Knight homestead, which stands at the corner of Browning Road and Collings Avenue, shadowed by the Heights of Collingswood apartments. The Stokes-Lees mansion located in the 600 block of Lees Avenue dates back to 1707, making it one of the oldest houses in Camden County. Sections of Harleigh Cemetery, the location of poet Walt Whitman's tomb are in Collingswood, as is the mailing address for the Camden County Historical Society. 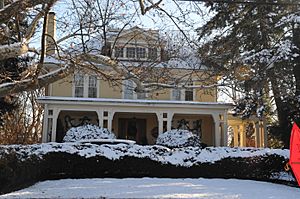 Unincorporated communities, localities and place names located partially or completely within the borough include Knight Park.

The Cooper River serves as the northern border of Collingswood.

There were 6,263 households out of which 25.6% had children under the age of 18 living with them, 38.2% were married couples living together, 13.1% had a female householder with no husband present, and 44.7% were non-families. 36.6% of all households were made up of individuals and 14.0% had someone living alone who was 65 years of age or older. The average household size was 2.27 and the average family size was 3.05. 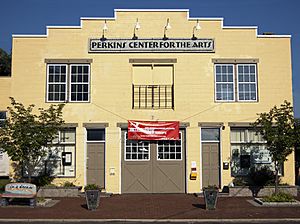 Perkins Center for the Arts, Collingswood

Collingswood's retail district is anchored by Haddon Avenue, a section of County Route 561 which runs from Camden to Haddonfield. Collingswood's downtown is known primarily for its restaurants, which span a variety of cuisines including American, Italian, Indian, French, Chinese, Mexican, Brazilian, Japanese, Ecuadorian, and Thai. The American Planning Association designated Haddon Avenue as one of its 10 Great Streets for 2009. The group chose the street "for the way it melds the past with the present", making Collingswood the first New Jersey community to be cited under the association's Great Places in America program.

On Saturdays from May to November, the borough hosts a farmers' market under the PATCO line, featuring local produce, baked goods, and crafts.

Collingswood sponsors a bike share program, a community greenhouse, as well as a composting program. Beginning in 2009, Collingswood hosts a Green Festival to raise awareness of environmental responsibility.

Monthly "2nd Saturdays" have the borough's art galleries, stores and restaurants hosting new exhibitions by local, national, and international painters, sculptors, and photographers. In 2002, the Moorestown based Perkins Center for the Arts opened a second location in Collingswood.

The DePace Sports Museum and Library opened in Collingswood in 2015.

The borough is home to two theater companies, the Collingswood Community Theatre and the Collingswood Shakespeare Company which perform throughout the year. The Ballroom and Theater at Collingswood hosts local theatrical productions as well as national recording artists such as Ben Folds and The Beach Boys. 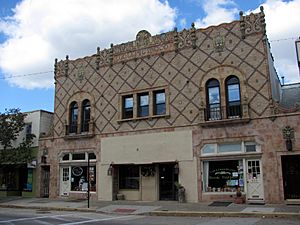 The Rutgers University-Camden based Symphony in C orchestra's administrative and box offices are located on Haddon Avenue.

The annual Collingswood Book Festival hosts various authors including Camille Paglia and Matthew Quick, whose novel The Silver Linings Playbook took place in the borough (with scenes in Oaklyn, Voorhees and the city of Philadelphia), though David O. Russell's film adaptation was set in Ridley Park, Pennsylvania.

Art Within Reach is a program that offers handmade items produced by local artists, with all profits going to the artists. With the 2014 season, the shows are held twice each year at The Factory.

Collingswood has a large LGBTQ community and Mayor Jim Maley was one of a handful of New Jersey mayors to perform midnight civil union ceremonies the day New Jersey's Civil Union law took effect in 2006; in 2013 Mayor Maley performed a number of same sex marriages at the Scottish Rite ballroom after same-sex marriage was recognized in New Jersey. In 2004, The Philadelphia Inquirer wrote about the borough's "fast growing gay and lesbian community," and the statewide LGBT advocacy and education organization Garden State Equality maintained a Southern New Jersey office in Collingswood until 2010.

Knight Park is the home to daytime recreation of the town. It is located across the street from Collingswood High School and it hosts the home games of the high school's sports teams, such as women's field hockey, lacrosse, baseball and softball. During the summer months, the borough offers outdoor movies and classical concerts in the park. 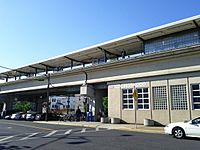 PATCO High-Speedline Station to Philadelphia and Lindenwold in Collingswood

The Collingswood PATCO Speedline Park and Ride station links the town to Camden and Philadelphia by elevated rail.

All content from Kiddle encyclopedia articles (including the article images and facts) can be freely used under Attribution-ShareAlike license, unless stated otherwise. Cite this article:
Collingswood, New Jersey Facts for Kids. Kiddle Encyclopedia.