David Harold Blackwell (April 24, 1919 – July 8, 2010) was an American statistician and mathematician who made significant contributions to game theory, probability theory, information theory, and Bayesian statistics. He is one of the eponyms of the Rao–Blackwell theorem. He was the first African American inducted into the National Academy of Sciences, the first black tenured faculty member at the University of California, Berkeley, and the seventh African American to receive a Ph.D. in Mathematics.

Blackwell was also a pioneer in textbook writing. He wrote one of the first Bayesian textbooks, his 1969 Basic Statistics. By the time he retired, he had published over 90 books and papers on dynamic programming, game theory, and mathematical statistics.

David Harold Blackwell was born on April 24, 1919, in Centralia, Illinois, to Mabel Johnson Blackwell, a full-time homemaker, and Grover Blackwell, an Illinois Central Railroad worker. He was the eldest of four children. Growing up in an integrated community, Blackwell attended "mixed" schools, where he distinguished himself in mathematics. During elementary school, his teachers promoted him beyond his grade level on two occasions. It was in a high school geometry course, however, that his passion for math began. An exceptional student, Blackwell graduated high school in 1935 at the age of sixteen.

Blackwell did a year of postdoctoral research as a fellow at Institute for Advanced Study (IAS) in 1941 after receiving a Rosenwald Fellowship. There he met John von Neumann, who asked Blackwell to discuss his Ph.D. thesis with him. Blackwell, who believed that von Neumann was just being polite and not genuinely interested in his work, did not approach him until von Neumann himself asked him again a few months later. According to Blackwell, "He (von Neumann) listened to me talk about this rather obscure subject and in ten minutes he knew more about it than I did."

He departed when he was prevented from attending lectures or undertaking research at nearby Princeton University, which the IAS has historically collaborated with in research and scholarship activities, because of his race. 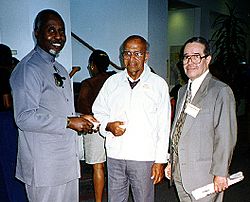 From left to right: Abdulalim Shabazz, David Blackwell, and J. Ernest Wilkins Jr. at the Conference for African American Researchers in the Mathematical Sciences (CAARMS) in June 1995.

Seeking a permanent position, he wrote letters of application to 105 historically black colleges and universities. He felt at the time that a black professor would be limited to teaching only at black colleges. He also sought a position at the University of California, Berkeley, and was interviewed by statistician Jerzy Neyman. While Neyman supported his appointment, Griffith C. Evans (the head of the mathematics department) objected, citing the concerns of his wife. It was customary for them to invite all the members of the department over for dinner and "she was not going to have any darkie in her house."

He was offered a post at Southern University at Baton Rouge, which he held in 1942–43, followed by a year as an Instructor at Clark College in Atlanta. He then moved to Howard University in 1944 and within three years was appointed full professor and head of the Mathematics Department. He remained at Howard until 1954.

From 1948 to 1950, Blackwell spent his summers at RAND Corporation with Meyer A. Girshick and other mathematicians exploring the theory of duels. In 1954 Girshick and Blackwell published Theory of Games and Statistical Decisions.

He took a position at the University of California, Berkeley as a visiting professor in 1954, and was hired as a full professor in the newly created Statistics Department in 1955, becoming the Statistics department chair in 1956. He spent the rest of his career at UC Berkeley, retiring in 1988.

On 3 October 2014, President Obama awarded Dr. Blackwell with the National Medal of Science posthumously. The award was accepted by two of his children, Hugo Blackwell and Sara Blackwell Hunt.

David Blackwell died of complications from a stroke on July 8, 2010, at Alta Bates Summit Medical Center in Berkeley, California.

All content from Kiddle encyclopedia articles (including the article images and facts) can be freely used under Attribution-ShareAlike license, unless stated otherwise. Cite this article:
David Blackwell Facts for Kids. Kiddle Encyclopedia.