Centralia is a city in Clinton, Jefferson, Marion, and Washington counties in the U.S. state of Illinois. The population was 13,032 as of the 2010 census, down from 14,136 in 2000. The current mayors are James Veller and Jamie Long.

Centralia is named for the Illinois Central Railroad, built in 1853. The city was founded at the location where the two original branches of the railroad converged. Centralia was first chartered as a city in 1859. Coincidentally, Centralia is "central" for another reason, perhaps unbeknownst to its founders: in the southern city limits is the intersection of the Third Principal Meridian and its baseline. This initial point was established in 1815, and it governs land surveys for about 60% of the state of Illinois, including Chicago. The original monument is at the junction of Highway 51 and the Marion-Jefferson County Line Road; today there is a small easement situated in the northeast corner of this intersection, which contains a monument and historic marker. Production of PayDay candy bar began here in 1938. Michael Moore's documentary, The Big One, opens with the closing of this candy bar plant. The town of Centerville, Washington was renamed Centralia, Washington to avoid being confused with another Centerville in that state. The suggestion came from a former resident of the Illinois town.

Centralia is located approximately 60 miles (97 km) east of St. Louis, Missouri. Most of the city, including its downtown, is in southwestern Marion County, but the city extends west into Clinton County and south 5 miles (8 km) into Washington and Jefferson counties. The city is 10 miles (16 km) north of exit 61 of Interstate 64 and 9 miles (14 km) west of exit 109 of Interstate 57. Centralia is one of three Illinois cities with portions in four counties, the others being Barrington Hills and Aurora. Because of its unique location within multiple counties, portions of Centralia are associated with different Core Based Statistical Areas (CBSAs). The Centralia Micropolitan Statistical Area includes all of Marion County. The Clinton County portion of the city is considered part of the St. Louis, MO–IL Metropolitan Statistical Area, while the Jefferson County portion lies within the Mt. Vernon Micropolitan Statistical Area. The portion of Centralia in Washington County is not considered part of any metropolitan or micropolitan area.

There were 5,784 households out of which 28.1% had children under the age of 18 living with them, 43.1% were married couples living together, 14.6% had a female householder with no husband present, and 38.3% were non-families. 34.5% of all households were made up of individuals and 17.0% had someone living alone who was 65 years of age or older. The average household size was 2.30 and the average family size was 2.95.

On March 25, 1947, the Centralia No. 5 coal mine explosion near the town killed 111 people. The investigation team sent by the Mine Safety and Health Administration of the U.S. Department of Labor found that "a blownout shot of explosives that was stemmed with coal dust or an underburdened shot of explosions could have ignited the coal dust that was raised by preceding shots of explosions."

blown-out shot
a blast in which the explosive action breaks little or no coal or rock
underburdened
insufficient burden of rock in relation to the explosive charge, resulting in a blown-out shot or a premature shot through shock of a neighboring charge of a blast pattern, often yielding less work than expected.

The story of the 1947 disaster is memorialized in folk singer Woody Guthrie's song "The Dying Miner". Guthrie's recording of the song can be heard on the Smithsonian-Folkways CD recording Struggle (Smithsonian Folkways, 1990). Songwriter and labor scholar Bucky Halker recorded a very different arrangement of "Dying Miner" on his CD collection of Illinois labor songs Welcome to Labor Land (Revolting Records, 2002). Halker also recorded "New Made Graves of Centralia", a song he located on an obscure recording without the name of the author or recording artist. Halker's recording appears on his CD Don't Want Your Millions (Revolting Records, 2000).

Centralia's Foundation Park is a scenic 235-acre (0.95 km2) park that features hiking trails, an exercise trail, an ice skating pond and two fishing ponds stocked with bass, bluegill and catfish. The park also sports a restored prairie, a 27-hole disc-golf course, a Chapel in the Woods, the Hall Shelter, the Sentinel Shelter, The Bowl (an outdoor amphitheatre), Moose Oven and the Miner's Memorial. 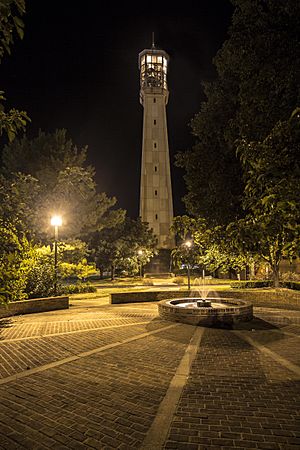 Foundation Park is the site of the annual Balloon Fest, a hot air balloon festival. Recent events have had about forty balloons and drew 40,000 visitors. The Annual Centralia Balloon festival was the event in which the second "Space Shuttle" hot air balloon was crashed due to a fuel line defect.

Centralia High School is home of the Orphans and Annies. The Centralia boys basketball team won its 2,000th game during the 2007–08 season, making it the winningest team in the US. The Centralia Orphans were the State Runner-Up in the 2011 Class 3A.

The Orphans got their unique nickname during the early 1900s, when the boys basketball team made it to the state tournament. The school was low on funds at the time, and the team was forced to pick its uniforms from a pile of non-matching red uniforms. The team made it to the state tournament, where an announcer commented that the team looked like a bunch of orphans on the court. The name stuck. Previously, the team had gone by nicknames such as the Reds and Cardinals. The Centralia Orphans were recently named the Most Unique Mascot in the nation by USA Today.

Christ Our Rock Lutheran High School first opened its doors in August 2004 with just nine students. As of 2013, the student body has grown to over 100 students. Christ Our Rock is the home of the Silver Stallions.

One of only two remaining 2500 class steam locomotives from the Illinois Central Railroad is preserved on static display at Centralia's Fairview Park. The locomotive is maintained by the Age of Steam Memorial non-profit organization.

All content from Kiddle encyclopedia articles (including the article images and facts) can be freely used under Attribution-ShareAlike license, unless stated otherwise. Cite this article:
Centralia, Illinois Facts for Kids. Kiddle Encyclopedia.