Kids Encyclopedia Facts
Not to be confused with Clinton, Illinois.

Clinton County is a county located in the U.S. state of Illinois. As of the 2010 census, the population was 37,762. Its county seat is Carlyle.

In 1960, the U.S. Census Bureau placed the mean center of U.S. population in Clinton County.

In 1805, prior to the establishment of the county, the territorial government established a post road from its capital (Vincennes, Indiana) to St. Louis, Missouri, passing through the county. In 1808 a wagon road was laid out through what is now Clinton County. The road extended from the Goshen Settlement to the Ohio salt works and crossed the Kaskaskia River at Carlyle.

Clinton County was created on December 27, 1824 out of Washington, Fayette, and Bond Counties. It was named in honor of the seventh Governor of New York, DeWitt Clinton, who helped build the Erie Canal.

Crossing the Kaskaskia became much easier when the bridge now known as the General Dean Suspension Bridge was built in 1859, at a cost of $40,000. Before the bridge was constructed travelers had been forced to cross by ferry or over a mud bridge. The Illinois General Assembly set aside $20,000 for bridge restoration in 1951 and in 1953 the bridge was named after William F. Dean. 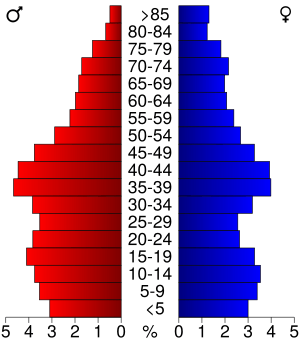 All content from Kiddle encyclopedia articles (including the article images and facts) can be freely used under Attribution-ShareAlike license, unless stated otherwise. Cite this article:
Clinton County, Illinois Facts for Kids. Kiddle Encyclopedia.