Bond County is a county located in the U.S. state of Illinois. As of the 2010 census, the population was 17,768. Its county seat is Greenville.

Bond County was formed in 1817 out of Madison County. It was named for Shadrach Bond, who was then the delegate from the Illinois Territory to the United States Congress, and who thereupon became the first governor of Illinois, serving from 1818 to 1822.

In 1824, a vote taken on slavery in Bond County had received 240 votes against and 63 votes for slavery. While Illinois was not a slave state, it was adjacent to slave states, Missouri and Kentucky, and did allow the continued use of "indentured servants," a process many slaveowners used to keep their slaves even in a free state.

In Bond County, at one point 14 slaves were registered to eight owners. One slave, Silas Register, took his last name from the act of being registered at the county clerk's office. Register was the last known Bond County slave to survive; he died in 1872 at the age of 76. A few of the slaves are buried in the county with the families they were indentured to. One former slave, Fanny, was free after her owners moved out of the state and worked in the town so that she could buy her husband, Stephen, at auction in Missouri.

Greenville College was founded as Almira College in 1855. In 1941, college president H.J. Long "declared the founding of Almira and Greenville ran parallel, for both were founded on prayer."

When Abraham Lincoln and Stephen Douglas gave speeches in Greenville in 1858 during a campaign for the United States Senate, Douglas said: "Ladies and gentlemen it gives me great and supreme gratification and pleasure to see this vast concourse of people assembled to hear me upon this my first visit to Old Bond." The Illinois State Register reported of the occasion: "I've seen many gatherings in Old Bond county but I never saw anything equal to this and I never expect to."

On April 18, 1934, during the Great Depression, a group of 500 protesters marched to the Illinois Emergency Relief Commission to lodge complaints about the delivery of emergency supplies from the state and federal governments.

Ronald Reagan visited Greenville on the campaign trail in the 1980s and gave a speech on the courthouse lawn. Barack Obama, the junior Senator from Illinois elected as President in November 2008, also visited Greenville while campaigning for his Senate seat in 2004, in a visit hosted by the Bond County Democrats. Women in Bond County could vote for the first time in 1914. 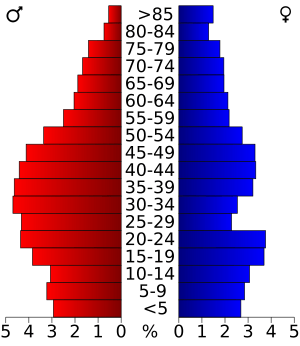 Bond County is divided into these nine townships:

All content from Kiddle encyclopedia articles (including the article images and facts) can be freely used under Attribution-ShareAlike license, unless stated otherwise. Cite this article:
Bond County, Illinois Facts for Kids. Kiddle Encyclopedia.