Madison County is a county in the U.S. state of Illinois. According to the 2010 census, it had a population of 269,282. The county seat is Edwardsville, and its largest city is Granite City.

Madison County is part of the Metro-East region of the St. Louis, MO-IL Metropolitan Statistical Area. The pre-Columbian city of Cahokia Mounds a World Heritage Site was located near Collinsville. Edwardsville is home to Southern Illinois University Edwardsville. To the north, Alton is known for its abolitionist and American Civil War-era history. It is also the home of Southern Illinois University Dental School.

Madison County was established on September 14, 1812. It was formed from parts of Randolph and St. Clair counties and named for President James Madison. At the time of its formation, Madison County included all of the modern State of Illinois north of St. Louis, as well as all of Wisconsin, part of Minnesota, and Michigan's Upper Peninsula.

In the late 19th century, Madison County became an industrial region, and in the 20th century was known first for Graniteware, and later for its steel mills, oil refineries, and other heavy industries. The county had a large working population, and the county and surrounding area was a center of strength for the Democratic Party.

In 2009, the EPA issued an air pollution report that ranked Madison County as the county with the second-highest cancer risk in the country due to air pollution, second only to Los Angeles County, California. 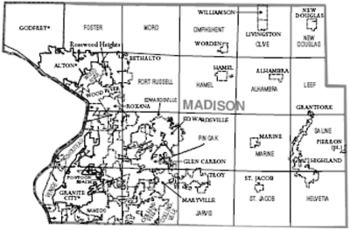 All content from Kiddle encyclopedia articles (including the article images and facts) can be freely used under Attribution-ShareAlike license, unless stated otherwise. Cite this article:
Madison County, Illinois Facts for Kids. Kiddle Encyclopedia.