A view of Chouteau Island from the Chain of Rocks Bridge 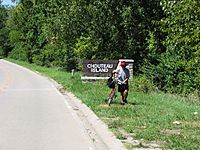 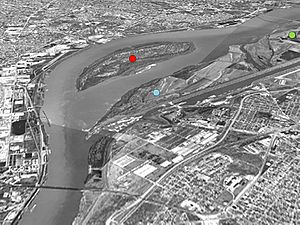 Chouteau Island ( SHOH-toh), situated approximately eight miles (13 km) due north of the Gateway Arch in St. Louis, Missouri, and approximately one mile (1.6 km) south of the confluence of the Missouri River and Mississippi River, is one of a cluster of three islands: Chouteau Island, Gabaret Island, and Mosenthein Island. The three, with a combined area of approximately 5,500 acres (20 km2), are located in Madison County, Illinois. The three-island complex is also referred to as "Chouteau Island". The island is manmade, having been created during the construction of the Chain of Rocks Canal between 1946 and 1953. Most of Chouteau Island lies in Chouteau Township, but its southern quarter lies in Venice Township, both in Madison County. Gabaret Island and Mosenthein Island both lie entirely in Venice Township.

Chouteau Island is accessed by car only from Illinois via the Canal Bridge, a one-lane vehicular bridge that crosses the Chain of Rocks Canal. From Missouri, visitors may reach the Island by foot or bicycle traffic via U.S. Route 66's Old Chain of Rocks Bridge.

Chouteau Island is a key part of the Confluence Greenway, a regional recreation corridor. Popular events on the Island, include Eagle Days (held each January for watching bald eagles) and various recreational bicycle rides. Several walking/biking trails have been developed on the Island.

Lewis and Clark camped on Gabaret Island on December 11, 1803, prior to establishing Camp Dubois near Wood River, Illinois.

Mississippi River Lock #27 (Chain of Rocks Lock) is located at the south end of the Island. Following the Great Flood of 1993, governments acquired all residences within the Island complex. Over 70 percent of Chouteau Island is now in public ownership, under the U.S. Army Corps of Engineers, the Illinois Department of Natural Resources and the city of Madison, Illinois. They are collaborating to develop Chouteau Island as a recreational complex to feature floodplain and grasslands restoration, additional trails, interpretive overlooks, picnic areas, camping areas and a visitors center near the entrance to the Old Chain of Rocks Bridge.

All content from Kiddle encyclopedia articles (including the article images and facts) can be freely used under Attribution-ShareAlike license, unless stated otherwise. Cite this article:
Chouteau Island Facts for Kids. Kiddle Encyclopedia.