Collinsville is a city located mainly in Madison County, and partially in St. Clair County, both in Illinois. As of the 2010 census, the city had a population of 25,579, an increase from 24,707 in 2000. Collinsville is approximately 12 miles (19 km) from St. Louis, Missouri and is considered part of that city's Metro-East area. It is the site of the Brooks Catsup Bottle Water Tower, the world's largest ketchup bottle, and is the world's horseradish capital.

Cahokia Mounds State Historic Site, a National Historic Landmark and UNESCO World Heritage Site, extends beyond the boundaries of the city toward the west. This prehistoric urban complex is estimated to have had a population of thousands at its peak, long before European exploration in the area. Monks Mound, the largest man-made earthwork in North America, is part of this complex.

Collinsville is the self-proclaimed "Horseradish Capital of the World", and sponsors an annual Horseradish Festival. The area is said to produce 85% of the world's horseradish, of such high quality that Germany and China (key users of the herb) import it for gourmet use. The Horseradish Festival is always during the first weekend in June and is held at Woodland Park located off of Route 159 in Collinsville. There are many activities for all ages, including a 5K, live music, a beauty pageant, and root grinding demonstrations. One of the most popular events is the Root Derby sponsored by American Family Insurance in which participants make a derby car out of a real horseradish root and race them during the festival.

Known for having a large ethnic Italian population, Collinsville also hosts an annual Italian Fest in the fall. The Italian Fest has been held every year since 1983 and is located uptown Collinsville on Main Street. This two-day festival celebrates everything Italian and is full of live music and vendors selling authentic Italian food such as spedini, spumoni, bagna cauda, canolli, and Italian Ices. Along with the festival, there are other activities including a parade, midnight bike ride, 5K Run/Walk, Little Miss & Mister Pageant, Bocce Ball Tournament, and a grape stomp. 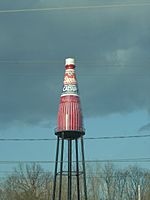 Collinsville is also home of the Brooks Catsup Bottle Water Tower, "the world's largest catsup bottle", a 170-foot-tall (52 m) water tower in the shape of a ketchup bottle, listed on the National Register of Historic Places. The bottle along with the property was put up for sale for USD $500,000.00 on July 12, 2014. In order to celebrate this roadside landmark, Collinsville hosts an annual World's Largest Catsup Bottle Festival in July.

The Cahokia Mounds State Historic Site is located within the city limits of Collinsville. The largest Pre-Columbian settlement north of Mexico, this was one of the first eight UNESCO World Heritage Sites designated within the United States. At its peak about 1200 CE, it had a population of 20,000-30,000, more than any city in the present-day United States until after 1800. It includes Monks Mound, the largest prehistoric earthwork in the Americas, and more than 70 surviving smaller mounds. Monks Mound is larger at its base than the Great Pyramid of Giza. The complex also includes a reconstructed Woodhenge, used for complex astronomical sightings. There is a museum and visitors' center.

Collinsville was originally settled by the Cook family and by a group of German American settlers who arrived by Conestoga wagon in 1812, from Pennsylvania, and who founded the Holy Cross Lutheran Church. They also had a hardware store, though they were mainly farmers. Within five or six years, a number of other settlers had arrived and began to perform the legal work required to form a town on the site. These original settlers are all buried in the Cook Cemetery or the Old Lutheran Cemetery. Other early settlers are buried in the Old German Cemetery near Sugarloaf Road near Maryville, Illinois.

The Fairmount Park Racetrack for horse racing is located in Collinsville. The racetrack is owned by the corporation Ogden-Fairmount Incorporated. This is one of five total racetracks in Illinois, and the only one located outside of Chicago. Fairmont Park Racetrack features a one-mile oval dirt track and opened in 1925. The racetrack originally hosted Thoroughbred flat racing as well as Standardbred harness racing. The racetrack has hosted popular races including the Fairmont Derby in the 1920s and the St. Louis Derby in 2006 along with other weekly live races. There are three restaurants at the track for speculators to enjoy: the Top of the Turf, the Black Stallion Room, and the 1st Turn Café. Admission for live racing is $1.50 per person on Tuesdays and $2.50 per person on Fridays and Saturdays.

There are several historical buildings in Collinsville. An impressive landmark built in 1885, the City Hall is still a working operation today. Built on property originally owned by the Collins family, this impressive structure features Italianate architecture with window crowns. Just a short, half-block walk from City Hall, the impressive State Bank of Collinsville building stands at the corner of Center and Main Streets. Designed in 1916 by architect Robert G. Kirsch, the beautiful structure features limestone exterior and marble interior walls. Although no longer operated as a bank, the building still has a looming presence and attracts the attention of visitors. Continuing west on Main Street, the Collinsville Public Library is about a three-block walk from the State Bank building. A colonial style brick building with an inviting circular stone walkway, the original library was completed in 1937. Additional wings were added in 1967 and 1980.

All content from Kiddle encyclopedia articles (including the article images and facts) can be freely used under Attribution-ShareAlike license, unless stated otherwise. Cite this article:
Collinsville, Illinois Facts for Kids. Kiddle Encyclopedia.