Highland is a city in Madison County, Illinois, United States. The population was 9,991 at the 2020 census. Highland began as a Swiss settlement and derived its name from later German immigrants.

Highland is a sister city of Sursee in Switzerland.

Highland, because it is located in Madison County, Illinois, is a part of the Metro-East region of the Greater St. Louis metropolitan area.

Highland, Illinois was settled in the early 19th century by Swiss-German settlers. The town was founded in 1837 and is celebrating its 175th Jubilee in 2012 with a Festival for the occasion planned in September. It was first named Helvetia (pronounced hellveesha) in accordance with the Heritage of the town's Swiss-German founding members. The town voted to change its name to the English version - Highland, in the early 20th century, as well as stopping production of its German language newspaper, in part to avoid negativity towards those of Germanic heritage at the advent of the First World War. Around the same time, a small town in northern Illinois also started calling itself Highland. Eventually, the town in northern Illinois became Highland Park. Highland also has been home to many well-known businesses including Pet Milk and the Wicks Organ Company. For the past 60 years, Highland Supply Corporation has been producing and selling Floral Grass - a traditional decorative product used to line Easter baskets. Highland is also home to The Korte Company (builder of many large and well-known buildings including Universal Studios in Florida). Highland has a rich history including extended visits by such notables as Abraham Lincoln.

Highland is in the process of implementing citywide availability of a municipal broadband network using Fiber to the home technology.

Highland is the setting for the first song on the Illinois album by Sufjan Stevens, titled 'Concerning the UFO sighting near Highland, Illinois', in which Stevens mentioned a 21st-century UFO sighting by the owner of the local mini-golf course.

Highland was also mentioned on The Daily Show on 9 Feb 2006. A report mentioned local pharmacist and state legislator Ron Stephens, who protested an executive order by then Illinois Governor Rod Blagojevich requiring a pharmacist to fill emergency contraception prescriptions. 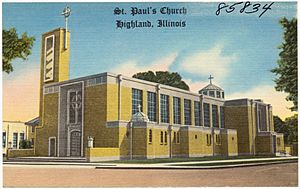 St. Paul's Church on a postcard

The Louis Latzer Memorial public library has a collection of more than 48,000 print volumes, a substantial media collection, and public computer access along with access to subscription databases and a genealogy collection. It is also a member of the Illinois Heartland Library System.

All content from Kiddle encyclopedia articles (including the article images and facts) can be freely used under Attribution-ShareAlike license, unless stated otherwise. Cite this article:
Highland, Illinois Facts for Kids. Kiddle Encyclopedia.