Jefferson County is a county located in the southern part of the U.S. state of Illinois. According to the 2010 census, it has a population of 38,827. The county seat is Mount Vernon.

The western border of the county adjoins the Greater St. Louis consolidated metropolitan statistical area, the Metro-East region, and the St. Louis commuter region and market and viewing area.

The first settler in Jefferson County is believed to have been Andrew Moore. In 1810, he settled near the southeast corner of the county, near where the Goshen Road emerges from the forest of Hamilton County into what is now known as Moore's Prairie. It is interesting that Moore arrived from the Goshen Settlement, near Edwardsville. His migration was therefore retrograde, from the west toward the interior of the State.

In 1814, Andrew Moore departed with his eight-year-old son for Jordan's settlement, a journey from which he never returned. A skull that was believed to have been Moore's was found several years later about two miles from his cabin. Jordan's Settlement, also called Jordan's Fort, was southeast of modern Thompsonville, Illinois, about twenty miles south of Moore's cabin. This episode occurred during the War of 1812 when many of the Indian tribes were allied with the British.

Jefferson County was organized in 1819, out of parts of White, Edwards and Franklin Counties. It was named in honor of Thomas Jefferson, principle draftsman of the Northwest Ordinance, among other things. The baseline along the northern border of the County crosses the Third Principal Meridian at the northwest corner of the County. 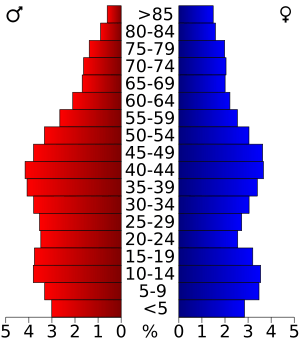 In 2015 the county police department announced that the words "In God We Trust" will be on police squad cars.

All content from Kiddle encyclopedia articles (including the article images and facts) can be freely used under Attribution-ShareAlike license, unless stated otherwise. Cite this article:
Jefferson County, Illinois Facts for Kids. Kiddle Encyclopedia.