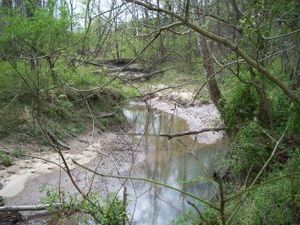 Casey Creek on its way to the Big Muddy River

Dix is a village in Jefferson County, Illinois, United States. The population was 494 at the 2000 census. It is part of the Mount Vernon Micropolitan Statistical Area.

Dix is located on high ground that marks the boundary between the Big Muddy River and its tributary, Casey Creek.

Today Dix is an exit on Interstate 57, a major north/south roadway. When it was founded, however, it was on the Goshen Road, which was the main east/west road in Illinois, running from Old Shawneetown, Illinois to near East St. Louis, Illinois.

Among the first settlers around Dix were two brothers named Andrews (Arba and Nelson?), who came from Rome, New York, around 1830. One of them established a post office called "Jordan's Prairie", the name already given to the grassland to the south. Later he platted out a village, which he called "Rome", after his home town in New York. The post office was moved into the village in 1852, and the name changed.

Hiram Milburn of Kell, Illinois moved to Rome between 1853 and 1855. Milburn built a storehouse in 1853 and a hotel in 1854. It is said that, during the construction of the hotel, a wind blew the structure down into a pile, while two men were on the joists, but nobody was hurt. In 1855 Milburn purchased Leuty's Mill and moved it to Rome.

Although Rome Township still exists, the name of the post office was changed to "Dix" in 1865. There was and still is another Rome, Illinois and the Post Office insisted that the name of this village be changed. The community incorporated as the Village of Rome in 1873. The name of the village was not legally changed to Dix until the 1960s.

There are several stories as to the origin of the name "Dix". One is that the town was renamed in honor of Gen. John Adams Dix. At the outbreak of the Civil War, Gen. Dix sent a telegram to his agents in New Orleans stating: "If any man pulls down the American flag, shoot him on the spot". Although the telegram was intercepted by Confederate agents and never reached its intended recipient, the text reached the press, and Gen. Dix became one of the first heroes in the North.

Dix is served by the Norfolk Southern Railway. This was built around 1890. The rail line comes from the St. Louis area and turns southeast at Dix. It follows the west side of Casey Creek down to Mt. Vernon.

There were 274 households out of which 16.8% had children under the age of 18 living with them, 34.3% were married couples living together, 6.2% had a female householder with no husband present, and 57.3% were non-families. 54.7% of all households were made up of individuals and 36.1% had someone living alone who was 65 years of age or older. The average household size was 1.80 and the average family size was 2.73.

All content from Kiddle encyclopedia articles (including the article images and facts) can be freely used under Attribution-ShareAlike license, unless stated otherwise. Cite this article:
Dix, Illinois Facts for Kids. Kiddle Encyclopedia.