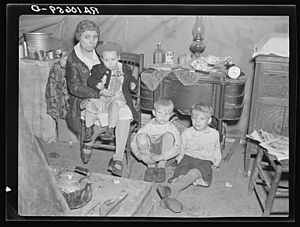 At least one record suggests that a village was established here by the Pekowi Shawnee led by Peter Chartier about 1748. In early November 1803, Lewis and Clark are believed to have stopped at Old Shawneetown on their way to Fort Massac, just down the Ohio River.

Old Shawneetown is the site of the first bank chartered in Illinois, in 1816. Originally in a log cabin, it was replaced in 1822 with a brick structure (only the second one in the town) now known as the John Marshall House.

Local legend states that the Shawneetown Bank refused to buy the first bonds issued by the city of Chicago on the grounds that no city located that far from a navigable river could survive.

Another historic bank building, the Bank of Illinois, was constructed in 1839-41 to house the offices of the Bank of Illinois at Shawneetown. It later housed numerous other financial institutions before it was closed in the 1930s. This fine example of Greek Revival architecture survives as the Shawneetown Bank State Historic Site.

Residents long remembered the visit by Gilbert du Motier, Marquis de Lafayette of France to the city on May 8, 1825, as a high point for the early community's social history.

There were 100 households out of which 36.0% had children under the age of 18 living with them, 44.0% were married couples living together, 20.0% had a female householder with no husband present, and 31.0% were non-families. 24.0% of all households were made up of individuals and 7.0% had someone living alone who was 65 years of age or older. The average household size was 2.78 and the average family size was 3.36.

All content from Kiddle encyclopedia articles (including the article images and facts) can be freely used under Attribution-ShareAlike license, unless stated otherwise. Cite this article:
Old Shawneetown, Illinois Facts for Kids. Kiddle Encyclopedia.