Mount Vernon known as "The King City" is a city in and the county seat of Jefferson County, Illinois, United States. The population was 15,277 at the 2010 census.

Mount Vernon is the principal city of the Mount Vernon Micropolitan Statistical Area, which includes all of Jefferson and Hamilton counties. 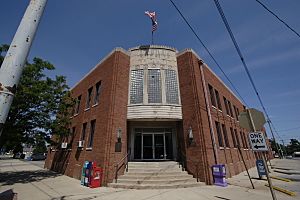 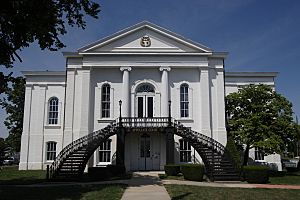 Mt. Vernon was founded in 1817 by Zadok Casey, who was elected to the State Senate in 1822 and was elected Lieutenant Governor in 1833. He served in the U.S. Congress between 1833 and 1843. The town was named for George Washington's plantation, Mount Vernon, which was named for Edward Vernon, a British naval hero.

When the town was founded, there was no road to it. Travelers had to get there by either following the high ground from the north or crossing the swamps from the south. In the early 19th century the Goshen Road crossed Illinois in a northwesterly direction from Old Shawneetown, Illinois to the Goshen Settlement, near what is now Edwardsville. This road was the main road in Illinois. When Mt. Vernon was first settled, the Goshen Road made a wide arc across Jefferson County, crossing Casey Creek and the Big Muddy north of Mt. Vernon, avoiding the swamps to the south, but bypassing Mt. Vernon. The road entered the county at its southeast corner. It passed through, or near, what are now Opdyke, East Salem, Idlewood, Dix and Walnut Hill. However, it was apparent to the early settlers that the town would fail without roads. In 1820–1821, Ben Hood and Carter Wilkey built a bridge over Casey Creek, to the southeast of town. This bridge was near the present bridge on Illinois Route 142. A road was built from there northwest, over ground that is now impassable, toward the old cemetery behind the modern Bethel Cemetery. Deep cuts through the old cemetery attest to the location of the road. From there the road probably followed modern Route 37 into town, somewhere shifting from 10th Street on west to 12th Street.

After the state capitol was moved to Vandalia in 1819, it became apparent that a road to Vandalia was needed. A party was sent out to the northwest to mark the road. In 1823, Thomas D. Minor and William Maxwell built the "Vandalia Road", now called the "Old Centralia Road." It runs northwest out of Mt. Vernon to Walnut Hill. Although legend says that this road is crooked because of the drunken state of the surveyors, the path is probably just the natural path of a pioneer road following the terrain. After the bridge and the Vandalia Road were built, Mt. Vernon was "on the map." The bridge across Casey Creek and the Vandalia Road provided a much shorter path across Jefferson County than the original Goshen Road. The new Goshen Road soon captured most of the traffic, and Mt. Vernon became an important stop on the road west.

In 1836, Joshua Grant came to Mt. Vernon from Christian County, Kentucky with several of his sons and daughters. His family was an extremely wealthy, southern, slave-owning family, most of which soon moved to Arkansas, probably because slavery was illegal in Illinois. Joshua left behind several daughters and one son, Angus McNeil Grant, who soon became extremely important in the development of the town. "Upon his arrival, there were but four or five houses in the place, and from that time to the present (1883) he has constantly and ably exerted himself in securing to it the full development of its resources." Angus M. Grant's brother, Joshua Jr. taught school in Mt. Vernon in 1838. Some sources cite him as the first schoolteacher in the town.

In 1848, the Illinois Supreme Court was relocated to Mt. Vernon at what is currently 14th and Main Streets. The 5th District Appellate Court was constructed in 1854 according to the National Register of Historic Places and is still in use as the Appellate Court House. When the Supreme Court was in session, the important lawyers in Illinois, including Abraham Lincoln, gathered in Mt. Vernon to argue their cases. The lawyers gathered at the Mt. Vernon Inn, owned by Angus McNeil Grant and his in-laws, the Andersons. This building has been on the National Register of Historic Places since July 2, 1973.

On February 19, 1888, a tornado cut a path a half mile wide through Mt. Vernon, killing 37 people and destroying more than 450 houses. The Jefferson County Courthouse was destroyed. This event was one of the first disasters to which the American Red Cross responded. Clara Barton herself directed the relief efforts.

The Mt. Vernon Car Manufacturing Company opened in 1889 after moving from Litchfield, Illinois. This relocation may have been an outgrowth of the relief efforts following the tornado. The Louisville and Nashville Railroad hauled in some 1,900 carloads of supplies for reconstruction of the town. Somehow, this effort translated into a major business building railroad cars, at first building about ten cars per day. By 1909, the car shops were producing 25 cars per day, employing more than 1000 workers, with a payroll of $60,000 per month.

During World War II, portions of the "Car Shops", as they had to come to be known, were converted over to wartime production, including the production of bomb casings. Around 1939, a portion of the car shops was purchased by Precision Engineering, which originally built components for locomotives. During the 1970s, this company purchased old diesel/electric railroad locomotives, which it scrapped out or refurbished. Today, the plant thrives as a hub for National Railway Equipment Company which rebuilds and services diesel electric locomotives for rail lines across the globe. Ironically, the facility is poised to again become one of the area's largest employers as sales of its innovative hybrid locomotives fuel plant expansion to include another facility across town.

In 1954, the car shops closed, causing a temporary jump in unemployment throughout the city and the 108 communities called "home" by its former employees.

The Interstate Highway System was built in the late 1950s and 1960s. The concurrency of I-57 and I-64 is along the western border of the ridgeline which divides the Big Muddy River and Casey Creek. The stack interchange on the southwest side of town complements the historic Casey Creek bridges, allowing much shorter travel times through the swamps to the east and south.

In April 2007, Mount Vernon voters elected the first female mayor of the city, Mary Jane Chesley. She was sworn into office on May 7, 2007.

Mt. Vernon is located on high ground between Casey Creek and the Big Muddy River, which join south of the town in what is now Rend Lake. In pre-settlement times the area around these waterways was a swamp, a heavily forested area that was waist-deep in water during much of the winter and during wet summers. Mt. Vernon was thus often surrounded by water and swamp on three sides.

High ground was located to the north of Mt. Vernon. A ridge ran between the Big Muddy River and Casey Creek north toward what is now Dix.

There are high places both west and east of Mt. Vernon from which one can see the town as a forested point of high ground jutting out into the bottoms. These high places are: from the west, near the Woodlawn interchange off Interstate 64 and from the east, on Old Fairfield Road near Summersville School, with the highest point located on Old Route 15 right before it merges with New Route 15, near Bluford.

Of the population over age 25, 72.7% have no college degree. 13.6% of those over 25 have no high school diploma nor equivalent. 7.6% of the population has a bachelor's degree or higher.

According to the US Census, health care services and social services employ the second most people with 1,001 estimated jobs. Accommodation and food services (restaurants) are the highest employer with 1,146 estimated jobs.

Mount Vernon is home to Cedarhurst which is a 90-acre site. Cedarhurst celebrates the arts year-round with visual and performing arts programs for the public. The Cedarhurst Craft Fair is held yearly in early September on the grounds. In addition to its programs on property, the Mitchell Museum is located on the CedarHurst grounds.

The city is host to an event the first Saturday of each month from April through October called Market Days. This is an open-air market held near downtown and is similar to a craft fair or flea market.

The C.E.Brehm Memorial Public Library, built in 1905, is a source of information to the community and is located downtown.

Beatles guitarist, George Harrison once bought a guitar from Fenton's Music store in Mt. Vernon in 1963 while he was visiting his sister in nearby Benton, Illinois. The guitar sold at auction for $657,000 in 2014.

All content from Kiddle encyclopedia articles (including the article images and facts) can be freely used under Attribution-ShareAlike license, unless stated otherwise. Cite this article:
Mount Vernon, Illinois Facts for Kids. Kiddle Encyclopedia.