Vandalia is a city in Fayette County, Illinois, United States. At the 2010 Census, the population was 7,042. Vandalia is 69 miles (111 km) northeast of St. Louis, on the Kaskaskia River. It served as the state capital of Illinois from 1819 until 1839, when the seat of state government moved to the current capital of Springfield. Vandalia was for years the western terminus of the National Road. Today, Vandalia is the county seat of Fayette County and the home of the Vandalia State House State Historic Site (1836). 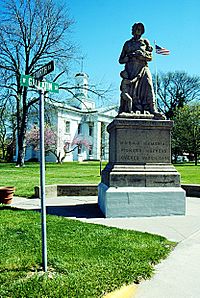 Madonna of the Trail statue in front of the Vandalia State House.

Vandalia was founded in 1819 as a new capital city for Illinois. The previous capital, Kaskaskia, was unsuitable because it was under the constant threat of flooding. The townsite was hastily prepared for the 1820 meeting of the Illinois General Assembly.

The history of the name Vandalia is uncertain. Different theories can be found in almost all of the books written about Vandalia over the years. In her book Vandalia: Wilderness Capital of Lincoln's Land, Mary Burtschi tells of a conversation between one of the original surveyors of the town and a Vandalia resident. The surveyor, Colonel Greenup, explained that Van was suggested by one of the men. He recommended this as an abbreviation to the word vanguard meaning the forefront of an advancing movement. Another suggestion was made for the term dalia, derived from the Anglo-Saxon word dale which means a valley between hills. Greenup takes credit in the conversation for connecting the two terms to form the name Vandalia.

Another possible source of the name is the Vandalia colony, a failed attempt to establish a fourteenth colony in part of what is now West Virginia and Ohio. The Vandalia colony was named in honor of Queen Charlotte, who claimed descent from the Wendish tribe of Obodrites, also called the Vandals.

Another theory put forth is that Vandalia was named by those who located the state capital in the town; according to the story, they mistakenly thought the Vandals were a brave Native American tribe, rather than of Germanic origins.

The law under which Vandalia was founded included a provision that the capital would not be moved for twenty years. Even before the end of this period, the population center of the state had shifted far north of Vandalia. In 1837, the General Assembly voted to move the capital to Springfield.

On November 21, 1915, the Liberty Bell passed through Vandalia on its nationwide tour, while being returned to Philadelphia, Pennsylvania from the Panama-Pacific International Exposition in San Francisco.

In the early 1960s the sociologist Joseph Lyford examined the social structure of Vandalia in a book-length study that revealed the essentially corporatist nature of decision-making in the city; this work was recently revisited by the Economist newspaper.

The city has a Board of Education. Among the public schools in the city are Jefferson Elementary School and former Central School, which was condemned in 1980. The city's first high school was established in 1858. Vandalia is home to the Okaw Valley Area Vocational Center, which trains high school students in vocational trades. It also serves vocational students from nearby high schools such as those in Greenville and Mulberry Grove. The building trades class at the center each year purchases property in Vandalia, builds a house, and sells the improved property. They have sold 33 homes constructed by students.

All content from Kiddle encyclopedia articles (including the article images and facts) can be freely used under Attribution-ShareAlike license, unless stated otherwise. Cite this article:
Vandalia, Illinois Facts for Kids. Kiddle Encyclopedia.