The Vandalia State House, Illinois's fourth capitol, was built when Illinois was in its eighteenth year as a state. Admitted to the Union in 1818, Illinois quickly abandoned its first governmental center of Kaskaskia, and its capitol building (active in 1818–1820). A second "state house" was built of lumber at the new capital of Vandalia, but it burned to the ground after only three years (1820–1823).

The third capitol building (1824–1836), also built in Vandalia, was the scene of most of the service of Abraham Lincoln as a member of the Illinois state legislature. Lincoln did not, however, become a beloved figure in Vandalia. Elected from Sangamon County, closer to the geographic center of Illinois, Lincoln led a central Illinois caucus that called for the state government to move itself to the growing town of Springfield.

As a result of this threat, Vandalia businessmen took action. In 1836, when the legislature was in recess, they abruptly tore down the third Capitol building and built a larger fourth one on the same public square. The cost of the new brick building was $16,000. Vandalia hoped that the new Vandalia State House would be so nice to work in that it would encourage the state government to remain in town. 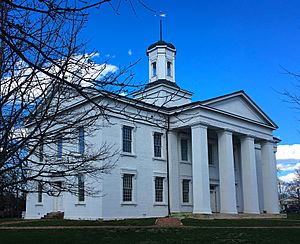 The building the legislators entered in December 1836 did not have the front or rear portico. The cupola was octagonal and featured a rounded roofline. The brick building was not painted white. Legislators began the session upset by the presence of workmen and the odor of damp plaster.

When Lincoln and his colleagues returned to Vandalia in the fall of 1836, they saw the new "State House" waiting for them. They were not impressed. In February 1837, the legislature, under pressure from Lincoln and his colleagues, moved the governmental center to Springfield. The fifth Illinois capitol, a Springfield building now called the Old State Capitol State Historic Site, served that purpose from 1839 to 1876. It was then replaced by the sixth and current Illinois State Capitol, which has been occupied since 1876.

The state of Illinois gave the Vandalia State House (in operation in 1836-1839, only three years) to Vandalia's county, Fayette County, for use as the county courthouse. Porticoes were added to the courthouse in the late 1850s, which made the building a structure in the Greek Revival style. The building served as a courthouse between 1839 and 1933, when it reverted to the state.

In 1933, the old courthouse became the Vandalia State House State Memorial, and an extensive program of interior refitting and reconstruction began. In 1985 the building became a State Historic Site within the new Illinois Historic Preservation Agency, which maintains the old state house and interprets it to its brief time as Illinois's fourth capitol building in 1836-39. Guided tours are offered and visitors can also view the period rooms on their own.

All content from Kiddle encyclopedia articles (including the article images and facts) can be freely used under Attribution-ShareAlike license, unless stated otherwise. Cite this article:
Vandalia State House State Historic Site Facts for Kids. Kiddle Encyclopedia.