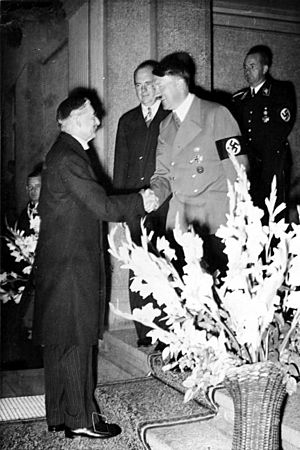 British Prime Minister Neville Chamberlain greeted by Adolf Hitler at the beginning of the Bad Godesberg meeting on 24 September 1938, where Hitler wanted annexation of Czech border areas without delay

Appeasement is a diplomatic policy of meeting political demands to an aggressive power in order to avoid conflict. The term was used for the foreign policy of the British governments of Prime Ministers Ramsay MacDonald, Stanley Baldwin and Neville Chamberlain towards Nazi Germany and Fascist Italy between 1935 and 1939.

All content from Kiddle encyclopedia articles (including the article images and facts) can be freely used under Attribution-ShareAlike license, unless stated otherwise. Cite this article:
Appeasement Facts for Kids. Kiddle Encyclopedia.