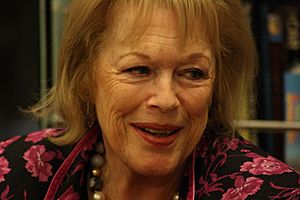 Lady Antonia was the daughter of the 7th Earl and Countess of Longford. She was married to Hugh Fraser from 1956 until their divorce in 1977. She was then married to the playwright Harold Pinter from 1980 until his death in 2008. She attended the University of Oxford. Her first major book - a biography of Mary, Queen of Scots was published in 1969.

All content from Kiddle encyclopedia articles (including the article images and facts) can be freely used under Attribution-ShareAlike license, unless stated otherwise. Cite this article:
Antonia Fraser Facts for Kids. Kiddle Encyclopedia.