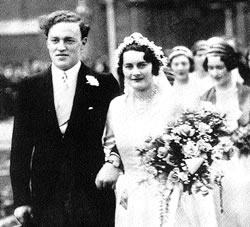 Elizabeth Pakenham at her wedding.

Elizabeth Pakenham, Countess of Longford CBE (née Harman; 30 August 1906 – 23 October 2002), better known as Elizabeth Longford, was a British historian. She was a member of the Royal Society of Literature and was on the board of trustees of the National Portrait Gallery in London. She is best known as a historian, especially for her biographies of 19th-century aristocrats such as Queen Victoria (1964), Lord Byron (1976) and the Duke of Wellington (1969).

The daughter of eye specialist Nathaniel Bishop Harman, she was educated at the Francis Holland School, and was an undergraduate at Lady Margaret Hall, Oxford. "Able, articulate and beautiful", in the words of The New York Times, she was "the Zuleika Dobson of her day, with undergraduates and even dons tumbling over one another to fall in love with her". A few years after her graduation, on 3 November 1931, she married Frank Pakenham, later 7th Earl of Longford, who died in August 2001. Her obituary by the BBC said the marriage was "famously harmonious." The New York Times, in its review of The Pebbled Shore, called Lady Longford "easily the best writer in what is predominantly a literary family".

She and her husband were both devout Roman Catholic converts, Lady Longford having been raised a Unitarian, and avid social reformers. The Longfords had eight children, among them the writers Lady Antonia Fraser, Lady Rachel Billington, Judith Kazantzis, and Thomas Pakenham.

She lived to the age of 96, dying in October 2002, 14 months after her husband. Lord Longford and his wife Elizabeth would have celebrated their 70th wedding anniversary on 3 November after a marriage that produced four sons and four daughters, followed by 26 grandchildren and 18 great-grandchildren.

She made several unsuccessful attempts to win election to the House of Commons as a Labour MP. In 1935 she contested Cheltenham, which was a safely Conservative seat, and in 1950 she was defeated by Quintin Hogg at Oxford. Through the war she had sought selection at Birmingham King's Norton until she felt compelled to cease her candidacy upon her sixth pregnancy in 1944; the seat was a Labour gain in 1945 by 12,000 votes.

Her brother, John B. Harman, was a physician; his daughter is Labour politician Harriet Harman. Lady Longford was a great-niece of the politician Joseph Chamberlain and a first cousin once removed of the British prime minister Neville Chamberlain.

All content from Kiddle encyclopedia articles (including the article images and facts) can be freely used under Attribution-ShareAlike license, unless stated otherwise. Cite this article:
Elizabeth Longford Facts for Kids. Kiddle Encyclopedia.