Joseph Chamberlain (8 July 1836 – 2 July 1914), was an important businessman and a politician. He worked to improve education, and cities. He was a Member of Parliament from 1876 to 1914, and Colonial Secretary (controlling British colonies) from 1895 to 1903. His son Austen won the Nobel Peace Prize and another son Neville was Prime Minister from 1937 to 1940.

Chamberlain was born in Camberwell in London. His father had a successful shoe company. Joseph was a good student, and won prizes at school in French and mathematics. He left school when he was 16 years old, and became an apprentice in his father's company. When he was 18, he moved to Birmingham to work in his uncle's screw company. He worked for the company until he was 38, and the company became very successful. 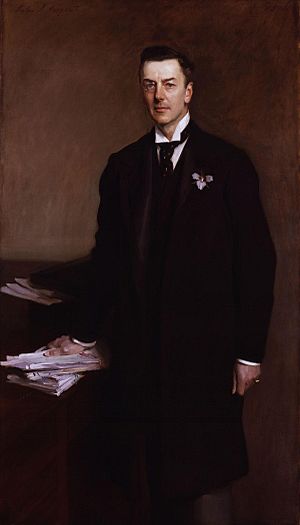 Chamberlain was a Unitarian, a Christian who believes Christ was an example of the way to live life, but was not divine (not a part of God). Unitarians try to work to help society. There were many problems in Birmingham after the industrial revolution, and many men were not allowed to vote. In 1868 Chamberlain helped a liberal man to become the Member of Parliament for Birmingham. In 1869, he started a group working for free primary education for all children.

In November 1869, he became a member of Birmingham City Council. There he worked for cheaper land prices for rural (countryside) workers, and became very popular. In 1873 he became the Mayor of Birmingham. He bought the gas companies and water companies for the city, so people were able to have clean and safe water. He made parks, roads, schools museums and built new houses for poor people.

In June 1876 he became the Member of Parliament (MP) for Birmingham. In parliament he worked to unite radical M.P.s (MPs that wanted change) against the Whig party who were in power. His work helped William Ewart Gladstone to become Prime Minister in 1880. Chamberlain often spoke about education in parliament. 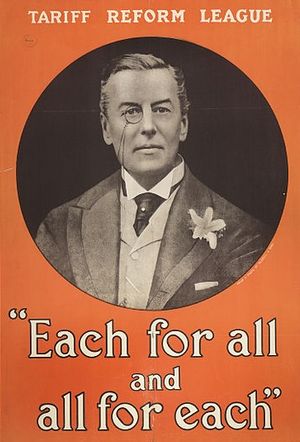 In 1880, Chamberlain became the President of the Board of Trade, the government minister working to improve trade. He made laws to help other cities to buy private companies, as he had done in Birmingham. He worked to make rents cheaper in Ireland, which was a British colony. At that time, many people believed that Ireland should have its own parliament, but many other people, including Chamberlain strongly disagreed. Chamberlain worked to help trade unions, but warned against socialism, saying that it would bring class war.

In June 1895, Chamberlain became Colonial Secretary of the government, controlling what happened in British Colonies. Because many European countries, especially Germany and France were growing stronger, Chamberlain wanted all countries in the British Empire to work together. He also wanted Britain to take more land in Africa. He built a railway along a part of the river Niger to help the British Royal Niger Company to grow. This land, together with the area Sokoto, became modern Nigeria in 1901.

Chamberlain also wanted Britain to control South Africa. He asked for more British soldiers in South Africa. He asked many British colonies to help, and in return helped Australia to get its own constitution. The Boers (Dutch farmers) did not want Britain to control their land, and in 1899 they attacked the British. This was the start of the Second Boer War. At first, Britain had problems fighting the Boers, but in 1900 the British became stronger. 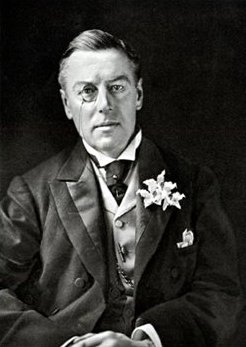 In Autumn 1900, Britain had a General Election. Chamberlain asked people to vote for (choose) the same government (with Prime Minister Salisbury) to help win the war. Because Chamberlain was very popular, many people voted for the government, and they stayed in control. Chamberlain helped Winston Churchill to become a Member of Parliament.

In May 1902, Britain won the Second Boer War. Chamberlain visited South Africa to try to help make a better relationship between the two countries. Back in Britain, he also spoke to Zionist Jews (Jews who wanted their own country) and spoke about giving land in Kenya to them. This plan was never realised. Chamberlain tried to make an alliance with Germany, but when this did not work he made an alliance between France and Britain. This was called the Entente cordiale, and ended hundreds of years of fighting between the two countries. 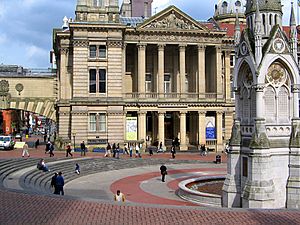 Chamberlain believed that the countries in the British Empire should do business with each other to become strong. To do this, Britain needed to tax imports (goods from other countries). This was called Tariff Reform. The government disagreed, so Chamberlain resigned from (quit) the government. He worked with other MPs to ask for Tariff Reform.

In 1906, just after his 70th birthday, Chamberlain had a stroke that made him very sick. He could not work hard, so his son, Austen Chamberlain (who was also an MP) helped him with his work. He died of a heart attack on the 2nd July 1914.

All content from Kiddle encyclopedia articles (including the article images and facts) can be freely used under Attribution-ShareAlike license, unless stated otherwise. Cite this article:
Joseph Chamberlain Facts for Kids. Kiddle Encyclopedia.