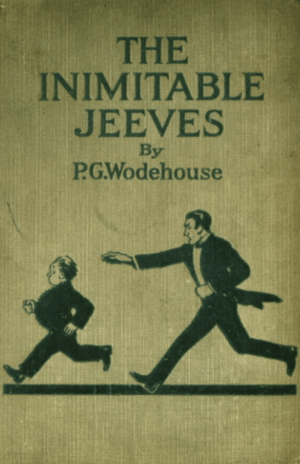 The Inimitable Jeeves, a collection of short stories featuring Jeeves.

Jeeves is a well-known children´s book series written by British author PG Wodehouse. They star Jeeves, the genius butler of Bertie Wooster, a rich, spoiled man in his twenties. The last Jeeves book, Aunts Aren´t Gentlemen, was written in 1974. The first Jeeves book, Extricating Young Gussie, was a short story written in 1915.

Reginald Jeeves is the butler of Bertie Wooster. He is extremely intelligent and strategic, but disagrees with Bertie on this such as clothes and furniture. 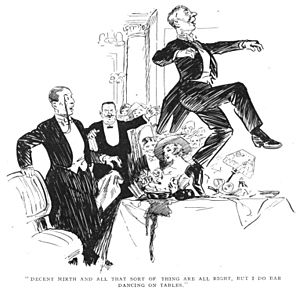 Strand Magazine illustration by Alfred Leete of "Jeeves and the Unbidden Guest," one of 34 Jeeves short stories.

Aunt Dahlia is Bertie´s ¨good aunt¨, and is quite jovial. She often jokingly insults Bertie. She also uses her chef, Anatole, as a threat for Bertie to help her when she needs it.

Madeline Bassett is (according to Bertie Wooster) a droopy girl, first mentioned in Right Ho, Jeeves. She was formerly engaged to Bertie but is later enaged to Bertie´s friend, Gussie Fink-Nottle.

Sir Roderick is a forceful personality. He is a nerve specialist (or, as Wooster calls him, the loony doctor) and the father of Honoria Glossop, to whom Bertie was once engaged. Bertie and Sir Roderick are often att odds, but following the events of Thank You, Jeeves, become good friends.

The Jeeves books were well-received.

Below is a list of both the Jeeves short stories, as well as images from them.

All content from Kiddle encyclopedia articles (including the article images and facts) can be freely used under Attribution-ShareAlike license, unless stated otherwise. Cite this article:
Jeeves Facts for Kids. Kiddle Encyclopedia.