Swanley is a town and civil parish in the Sevenoaks District of Kent, England. It is located approximately 16 miles (26 km) southeast of central London, adjacent to the Greater London boundary and within the M25 motorway periphery. The population at the 2011 census was 16,226. The local council is Swanley Town Council.

There is a theory that the placename Swanley developed from the Saxon term 'Swine-ley', "Ley" meaning a clearing in the woods and "swine" meaning pigs. So it has been suggested that it was originally a Saxon pig farm or a stopping place for pigs on the way to the markets in Kent . This later developed into what we now know as Swanley.

In the 6th and 7th Centuries, there were probably two homesteads. After the Norman Conquest, these portions of land were turned into manors, which were then often divided among the monks at Ghent Abbey and Bermondsey. The original settlement of the town of Swanley (as opposed to modern-day Swanley Village) was based around Birchwood which does get mention in later medieval and early modern documents.

The town developed from a crossroads with only three houses before the advent of the railway in 1861 to a town with a population of 16,588 (in 2001) in one and a half centuries. The newer settlement grew up around the railway junction and was originally named Swanley Junction, before becoming known as Swanley, and the original Swanley became Swanley Village, in the 1920s.

The arrival of the railway changed life in Swanley. The town became the location of Swanley Horticultural College which opened in 1887 and led to horticulture becoming the predominant industry. The college originally only catered for male students. Then in the early 1890s the first female students were admitted. Local Nurseries and florists' outlets blossomed, while casual farm labouring job opportunities on farms became in short supply. Some properties in Swanley still have apple and pear trees in their gardens from the original orchards. The college amalgamated with Wye College near Canterbury.

Contrary to popular myth, Swanley was never a major flower growing or orchard area (at least not more so than any other part of North Kent) however its location became attractive for London doctors seeking a cure for sick Londoners, escaping the smog of London.

Three hospitals were established, the Kettlewell (or Alexandra) Hospital in 1885, Parkwood Hospital in 1893 and White Oak Hospital in 1897. The Kettlewell stood on the site of Asda's car park and was for poor patients from London who needed to recuperate after major surgery. The Parkwood hospital was similarly used and White Oak was originally for children with eye diseases. During both World war I and II, Kettlewell and Parkwood were used as military hospitals, Parkwood become part of the Sidcup Hospital for facial injuries. After 1948, and the creations of the National Health Service, meant these old London Hospitals became redundant – Kettlewell and White Oak closed in 1959 and Parkwood ceased being a hospital in the early 1960s. Currently, the gates of White Oak can still be seen opposite Swanley Police Station in London Road, the Roman Catholic Church in Bartholomew Way is on the site of Kettlewell's chapel and Parkwood still exists in its entirety in Beechenlea Lane as Parkwood Hall School (a residential and day school).

The civil parish of Swanley was created in 1955 from neighbouring parishes of Farningham and Sutton at Hone reflecting the developments of the town and increase in population. In 1974 the parish council became a Town Council and included the settlements of Hextable, Swanley Village and the main town of Swanley. In 1988, Hextable was formed into a separate parish council.

Up until 1974 it was a part of the Dartford Rural District. 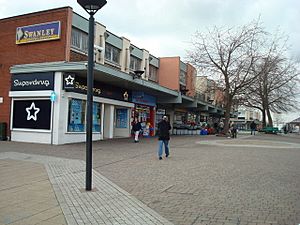 The closest large towns are Bexleyheath, Dartford, Orpington and Sidcup.

The Swanley post town in the BR postcode area includes the hamlet of Hockenden in the London Borough of Bromley.

Today, Swanley is essentially a commuter and distribution centre, home to a mainly lower-middle and working class population. It relies on trading via its rail links to Central London and its proximity to the M25 motorway. Being on the outskirts of south east London, it is a convenient commuter town for people who work in the city, as they can still be paid the London living wage. It still keeps some traditional links with Sevenoaks and Kent but it is heavily associated with South East London due to the expansion of that area close to Swanley's borders. The majority of housing development took place from the post-war period to late 1980s. A new fire station was opened in 1962, and new post office two years later. Victorian houses and shops were demolished to create a new town centre. Its 1970s shopping centre was then re-modelled in the 1990s when the Asda supermarket was extended and is one of the larger Asda stores.

Swanley station serves the area with services to Central London via Bromley South. There are also services to Sevenoaks, Gillingham and Ashford International.

Local business sponsor the floral displays, while the Town Council maintains the grass verges and open spaces. The residential is a mix of private housing with social housing on two main estates at St Mary's and White Oak largely provided by West Kent Housing Association who have an office in Swanley Centre.

Swanley Park (which covers 60 acres of countryside) was previously known as New Barn park as it was previously New Barn Farm until various fields and orchards were bought by the Town Council to protect the green belt between Hextable and Swanley. There remains acknowledgement of the former use (as a farm) with an avenue of fruit trees remaining and new avenues of trees linking the car parks to the central area of play areas, café and paddling pool and water play and boating lake. The Town Council has maintained old hedgerows and trees around the outside of the park and has created allotments and an environment area that is now managed by local volunteers. The park is home to Swanley Athletics club and hosts a number of county cross country races and other events each year. Around one of the large fields is Swanley New Barn Model railway (running on 800 metres of track) operated by a group of volunteers throughout the summer. A classical music and firework event – called the '1812 Night' – is held on the Friday before the August bank holiday.

At the Western boundary of Swanley was the 'Bull Hotel' which had a long history at the site serving the passing trade, during the 1980s to 2000 this changed to Hickorys Nightclub (1st Leisure Group) and then was renamed 'Deja Vu Nightclub' after a refurbishment in the mid 1990s, and in 2011 was rebuilt to create a hotel and restaurant operated by Premier Inns. Due to the recession of 2009–2010, the 'Birchwood Pub' (previously called 'The Alma' after which the Alma Swanley FC was named) closed leaving only 'The Lullingstone Castle' in Swanley Centre, 'The Lamb' and 'Red Lion' in Swanley Village and 'The Olympic' in Beechenlea Lane, the latter operated by the Council and providing a bowls green, a snooker hall and a golf driving range.

Moose International meets as the Swanley Invicta Lodge and Circle at the St. Mary's Church Hall, while other several other organisations such as the Royal British Legion and the Swanley Light Opera Group meet at the Five Wents Memorial Hall. There are many clubs for elderly at the Alexandra suite and other centres and the Town Council offers trips and entertainment for over 60s who are residents of the Swanley Parish.

The Victorian St Mary the Virgin's Church is the Anglican parish church of Swanley. The Roman Catholic Church of the Holy Apostles was registered for worship in 1965, superseding a church hall used since 1931. Christ Church, originally Congregational and registered in 1904, is now part of the United Reformed Church. Also in the town are the Swanley Full Gospel Church (Assemblies of God), Elim Christian Centre (Elim Pentecostal), a Jehovah's Witnesses Kingdom Hall and a Brethren meeting room.

Orchards Academy is located close to the Town Centre and is the only Secondary School in the town. SupaJam Education in Music and Media is a unique educational provider, which offers music education for students post-16. Other schools are located in the nearby towns of Sidcup, Dartford and Orpington within 5 miles of Swanley. There are five Primary Schools in Swanley, with others in the surrounding villages. The closest Further Education Colleges are North Kent College and London South East College.

Alma Swanley F.C. was a popular local side but went bankrupt. Swanley Furness F.C. was another team from the town, though many support nearby Crockenhill F.C. as it is more successful. Titan Tigers is a popular local youth football club, which was formerly run from and trained in Swanley, but now are based in Hextable, training on the grounds of Hextable School. Titan Tigers has also just expanded into adult football with an Under 21s and Veterans team. Hexley Rangers F.C. is a FA Charter Standard (Hextable/Swanley) community-based junior football club that play at Downsview Primary School. Petham Park Panthers is another FA Charter club.

The Swanley and District Athletic Club, founded in 1988, meets at New Barn Park. The club organises and helps run a number of annual running and cross-country events.

Swanley Sub Aqua Club meets at the White Oak swimming pool on Monday nights. SSAC is an independent club that has been training people to dive safely since 1967. Since 2009 it has been offering free PADI training for club members.

Sidcup and District Motor Cycle Club owns the Canada Heights international motocross circuit at Button Street, Swanley. The venue was first used in 1948 and was purchased by the club in the 1980s. A round of the ACU British Motocross Championship is run each year as well as open Motocross, Enduro and Trials events for all types of motorcycles.

Swanley now has a rugby union club formed in 2017. At the time of writing they have achieved 3 promotions in 3 years, most recently winning Metropolitan Kent 4.

All content from Kiddle encyclopedia articles (including the article images and facts) can be freely used under Attribution-ShareAlike license, unless stated otherwise. Cite this article:
Swanley Facts for Kids. Kiddle Encyclopedia.