Edith Nesbit (1858–1924) was an English writer. She was known for her books for children. Some of her novels, such as The Railway Children, have been made into films.

Nesbit was born in 1858 at 38 Lower Kennington Lane in Kennington, Surrey (now part of Greater London), the daughter of an agricultural chemist, John Collis Nesbit, who died in March 1862, before her fourth birthday. Her sister Mary's ill health meant that the family travelled around for some years, living variously in Brighton, Buckinghamshire, France (Dieppe, Rouen, Paris, Tours, Poitiers, Angoulême, Bordeaux, Arcachon, Pau, Bagnères-de-Bigorre, and Dinan in Brittany), Spain and Germany, before settling for three years at Halstead Hall in Halstead in north-west Kent, a location which later inspired The Railway Children (this distinction has also been claimed by the Derbyshire town of New Mills).

When Nesbit was seventeen, the family moved back to London, living in South East London at Eltham, Elswick Road in Lewisham, Grove Park and Lee.

At eighteen, Nesbit met the bank clerk Hubert Bland in 1877.

Nesbit's children were Paul Bland (1880–1940), to whom The Railway Children was dedicated; Iris Bland (1881-1950s); Fabian Bland (1885–1900); Rosamund Bland (1886–1950), to whom The Book of Dragons was dedicated; and John Bland (1898–1971) to whom The House of Arden and Five Children and It were dedicated. Her son Fabian died aged 15 after a tonsil operation; Nesbit dedicated a number of books to him such as The Story of the Treasure Seekers and its sequels as well as many others. Nesbit's adopted daughter Rosamund collaborated with her on the book Cat Tales. 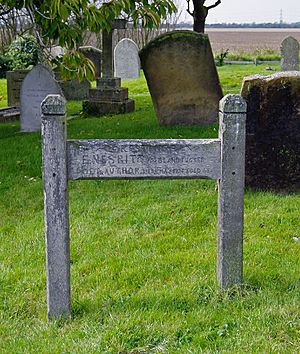 E. Nesbit's grave in St Mary in the Marsh's churchyard bears a wooden grave marker made by her second husband, Thomas Terry Tucker. There is also a memorial plaque to her inside the church.

Nesbit published approximately 40 books for children, including novels, collections of stories and picture books. Collaborating with others, she published almost as many more.

According to her biographer, Julia Briggs, Nesbit was "the first modern writer for children": Nesbit "helped to reverse the great tradition of children's literature inaugurated by Lewis Carroll, George MacDonald and Kenneth Grahame, in turning away from their secondary worlds to the tough truths to be won from encounters with things-as-they-are, previously the province of adult novels." Briggs also credits Nesbit with having invented the children's adventure story. Noël Coward was a great admirer of hers and, in a letter to an early biographer Noel Streatfeild, wrote "she had an economy of phrase, and an unparalleled talent for evoking hot summer days in the English countryside."

Among Nesbit's best-known books are The Story of the Treasure Seekers (1898) and The Wouldbegoods (1899), which both recount stories about the Bastables, a middle-class family that has fallen on (relatively) hard times. The Railway Children is also known from its adaptation into a 1970 film version. Gore Vidal called the time-travel book, The Story of the Amulet one in which "Nesbit's powers of invention are at their best." Her children's writing also included numerous plays and collections of verse.

She created an innovative body of work that combined realistic, contemporary children in real-world settings with magical objects – what would now be classed as contemporary fantasy – and adventures and sometimes travel to fantastic worlds. In doing so, she was a direct or indirect influence on many subsequent writers, including P. L. Travers (author of Mary Poppins), Edward Eager, Diana Wynne Jones and J. K. Rowling. C. S. Lewis was influenced by her in writing the Narnia series and mentions the Bastable children in The Magician's Nephew. Michael Moorcock would go on to write a series of steampunk novels with an adult Oswald Bastable (of The Treasure Seekers) as the lead character. In 2012, Jacqueline Wilson wrote a sequel to the Psammead trilogy, titled Four Children and It.

The Complete History is not the complete history. Some more stories about the Bastables are included in the 1905 story collection Oswald Bastable and Others. The Bastables also appear in the 1902 adult novel The Red House.

Stories and story collections for children

Template:Gc The Book of Dragons comprised The Seven Dragons, a 7-part serial, and an eighth story also published 1899 in The Strand Magazine. Augmented by a ninth story, "The Last of the Dragons" (posthumous, 1925), it was issued in 1972 as The Complete Book Of Dragons and in 1975 as The Last Of The Dragons and Some Others. The original title has been used since then, with the original contents augmented variously by "The Last of the Dragons"

All content from Kiddle encyclopedia articles (including the article images and facts) can be freely used under Attribution-ShareAlike license, unless stated otherwise. Cite this article:
Edith Nesbit Facts for Kids. Kiddle Encyclopedia.