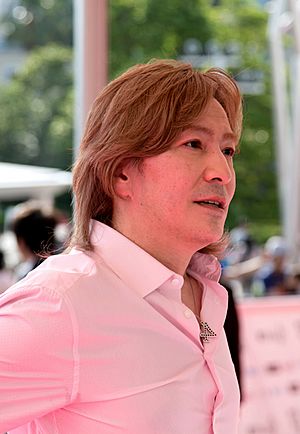 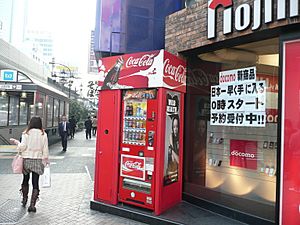 After the release of Play in 2007, Amuro's promotional campaigns started to rise; Amuro is picture promoted her single "Wild" on the side of a Coca-Cola vending machine.

Namie Amuro (Japanese: 安室 奈美恵) is a Japanese singer, born September 20, 1977 in Naha, Okinawa. She was the top J-Pop star of the 1990s, with a long string of number-one hits.

In July 2008, Namie released her third greatest hits album BEST FICTION, which sold over 1.500,000 copies. It was the year's the most selling female album in Japan and second most selling album of 2008 in Japan.

All content from Kiddle encyclopedia articles (including the article images and facts) can be freely used under Attribution-ShareAlike license, unless stated otherwise. Cite this article:
Namie Amuro Facts for Kids. Kiddle Encyclopedia.